“If you try to run, I've got six little friends and they can all run faster than you can.” – Seth, “From Dusk Till Dawn,” Dimension Films, 1996

You probably didn’t notice but movie house operators are telling everyone who will listen that folks – of all ages - are jamming themselves into theater seats and life is good.

At the same time, analysts have shifted their opinions on the rosy future of streaming video services to dire warnings that SVODs will find it tougher (impossible) to grow their subscription bases profitably.

After that, not so much.

In the early rollouts of “breathtaking” SVOD services – Disney +, WBD’s HBO Max, Paramount +, Peacock and others nationally/internationally – proudly announced they had surpassed 20, 40, 80, 100M subscribers in their home country and were aggressively moving into equally fertile markets around the globe.

After their first surge, it’s tougher.

Never Forever – The pie-in-the-sky vision for streaming content by financial analysts is that it will just begin and grow and that profits will roll in.  The vision is fantasy.  Subscribers join in phases – first the market leaders who like unique stuff without ads.  Then others as they become familiar with the idea, hear about the content, like it and tell others.

The first group of customers cost almost nothing to win.

They have to work harder, spend more money and develop new marketing ideas/efforts to bring in the second, third and fourth wave of ticket buyers and subscribes.

With each new wave of seats in the seats/subscribers, the time/expense budget increases.

Sean Gamble, head of Cinemark, the world’s third largest theater chain, recently said theater attendance was back but his firm wasn’t taking any chances and already had “new initiatives” planned to strengthen their position.

Reed Hastings, co-CEO of Netflix, who has long held that he’s against the complexity of advertising but a fan of subscription simplicity also acknowledged that subscription growth will require more than a heavy investment in new content to compete and grow in the global streaming arena.

We know a lot of Hollywood types will find it tough to agree but video entertainment is more than movies.

But then, when you have a hammer, everything looks like a nail. 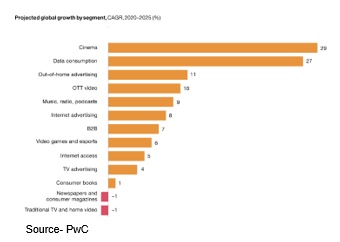 Entertainment Variety – Individuals and families have an almost limitless way of being entertained--both at home and out-of-the-home.  Cinemas will enjoy a strong rebound in the next few years … just not at the level of the “good ol days.”

Theater chains took a beating for the past two years as movie houses opened/closed, studios and networks launched their own D2C (direct to consumer) service, parents became better video gamers and kids used their personal screens to watch other kids doing stuff online.

It didn’t help the movie houses when some studio executives decided the time was right to be a little more flexible with their theatrical windows and beef up their streaming service subscriptions by dangling new movies in front of people.

It didn’t take long for financial/market prophets to say movie houses and appointment TV were fading and heading to oblivion.

None of that has happened.

Instead, people got more ways/opportunities to entertain themselves and be entertained.

Long Term – People around the globe have become accustomed to always being entertained, enjoying what they want and when they want it as well in special venues and so, the market will continue its healthy growth with shifting tastes and changing interests.

Ampere projected that theater revenues would reach about $35B this year, off slightly from 2018 but still good.

A Morning Consult study found that 62 percent of adults were comfortable going to the movie theater for the right film.

This summer, the right films were Top Gun: Maverick and Jurassic World Dominion.

Paramount did everything right to build anticipation – Cruise landing a helicopter on the USS Midway, a wild opening at Cannes, Cruise attending the Queen’s jubilee celebration, “leaks” of bare-chested beach volleyball, a premiere in Japan and the promotion of Val Kilmer’s return, the thundering buildup of Danger Zone and more.

The anticipation was so great even grandma and grandpa wanted to get to the cinema before all the good seats were taken!

Everyone Out – Young consumers everywhere were the first to experience the “thrill” of getting out to the movies.  Older patrons are slower to return, especially since many of the films aren’t targeted at their interests.

Roughly 41 percent of the respondents said that they saw films in theaters often or jut sometimes before the pandemic.

But the most telling finding was that people (4 out of 5) found the cost and hassle of going to the theater wasn’t worth it compared to watching the stuff at home.

The truth is there are films that go first to the theater because to watch them any other way (at least the first time) is … disappointing.  Everything about the films screams big screen, sound everywhere.

However, while most of the movies held for cinema release first are simply good films. They’re just as entertaining/satisfying on their screen or ours. In addition, there’s the content you wouldn’t “pay” to watch – game, reality, sketch, variety, soaps, police/fire/medical, docudrama and talk/chat shows. 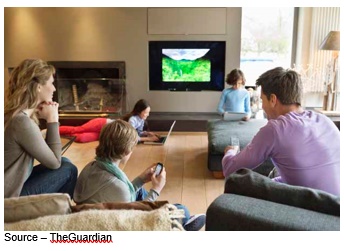 Alone Together – The idea of the family gathering around the big screen to enjoy an evening together is so heartwarming and so untrue.  Now that everyone has a screen, they enjoy the content they want but are only sorta, kinda together.

There are more than 1.7B TV households worldwide and has been growing steadily for the past 10 plus years.

Free-to-air digital TV continues to be the most popular TV distribution model around the globe and TV bundle growth continues to grow everywhere except in North America. 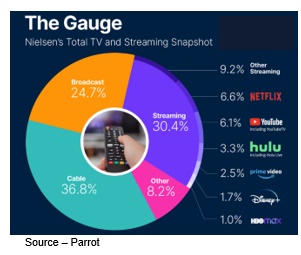 Home Options – While some people don’t want to admit they still devour a steady diet of appointment TV and have cut/shaved the cord, in North America and Europe broadcast and cable entertainment continues to grow.

Free-to-air broadcast is also still strong globally, so is digital cable pay TV, even though both have been losing viewers/subscribers since 2014.

Still, the two distribution categories account for more than 50 percent of the viewing public and should account for the majority of consumers and ad investments in coming years. 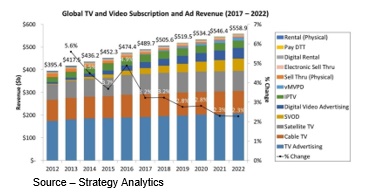 Variety – The one good thing for the content creation/distribution industry is that there is growth in almost every segment of the personal entertainment market.

Audiences are reducing their reliance on a fixed broadcast schedule and cutting the cord for a range of subscription and free streaming services to watch on-demand video content whenever, wherever and on the screen of their choice.

Comcast, the industry’s leading cable service provider, has already transitioned to being the broadband service for the home.

In a joint relationship with Charter, Comcast is launching a streaming box and set of services with networks and streaming services to provide centralized management of the household’s video, game, music, social content services with a singular UI.

Daily Diet – It’s probably a good thing that personal entertainment isn’t fattening because in many countries, individuals have increased their content consumption.

Video streaming consumption grew 10 percent during the first half of the year, even in mature markets such as North America (5 percent) and Europe (9 percent).

Despite the news of Netflix losing subscriptions during the first quarter of the year, the company is a long way from hitting its subscription ceiling and its rumored announcement of ad-supported tiers during the fourth quarter could spark a new surge in growth for the market leader.

Market analysts speculate that if Netflix delivers a new set of offerings around its current fee structure ($10 for basic plan, $16 for standard plan and $20 for premium plan)  it could spark a new increase in its subscription base which is already 221M globally, 74.5 in NA -- more than HBO Max, Paramount+, Discovery+, Peacock combined.

Apple is in a unique position, coming off an Oscar win early this year, has an already very low subscription fee ($5) and a well-rounded family of hardware and entertainment apps appreciated by the organization’s more than 1B global customers.

Amazon is a global e-commerce giant that generates millions in ads on its primary site, has dipped its corporate toe in ad-supported sports and operates a very fast-growing AVOD platform, Freevee.  Anything more might confuse their proposition.

The total number of SVOD services per user is presently at 4.6, down from last October’s peak of 5.2. People will ultimately settle on two-three core ad-free services and a similar number of ad-free and ad-supported services as their primary video entertainment options. 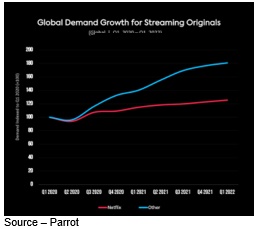 New, Unique – Once people have viewed all of the “new”stuff streaming services provide, they’re ready to move on and replace the service with one that has more new stuff.  It used to be called channel surfing but not if it directly affects the services’ bottom lines.

The demand from subscribers and the reason most sighted for dropping/adding services (33 percent annually) is the growing interest in seeing new, unique content.

Over time, this rush from one service to another will subside as people settle into an entertainment routine and begin exploring more of the services’ libraries of content. 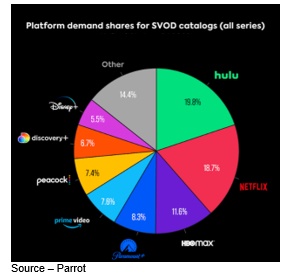 Rotating Specials – Video streaming services have discovered that instead of dumping all of their content out for people to watch, it is often better to cycle new entertainment as well as movies, TV shows from their library to spotlight them as “new opportunities” to reduce churn.

Subscription churning and switching is expected to continue, but the data is beginning to suggest that the industry is going to see this subside from the high point.

The consumer base that was driving most of the churn is also suggesting that their level of adding and cancelling TV services is going to decline. Digital TV Research projects that streaming movies/TV shows will increase to $224B by to 2027, up from an estimated $156B by the end of this year.

It is becoming increasingly obvious that three organizations have the potential to be the market leaders – Netflix, Disney, WBD.

Netflix already has content development, production, service activities in 138 countries and a strong relationship with local creators and studios to continue its growth.

Disney has the industry’s broadest range of content expertise in every genre area, strong name recognition around the globe and connections with country content producers.

WBD with the merger of Warner Bros and Discovery is quickly becoming a curator of its diverse genre of offerings and a new management team that understands the creative and consumer needs to deliver a consistent family of content solutions.

We forgot to mention the obvious must-do for all of the fresh/refreshed entertainment services is that they expand the opportunities for professional filmmakers/crews because great content needs to be created constantly.

As Seth said when Santanico Pandemonium beckoned him in From Dusk Till Dawn, “Can’t make it up to me. I tell you, you can't do it. Can't make it up!’

But then, he had more willpower than movie goers of all ages around the globe when they heard they were going to be able to relive – or see for the first time – Top Gun in action.

The interesting thing for us was that as part of the global film rollout, Paramount had a very significant uptick in people streaming the 36-year-old Top Gun original as well as other projects like Risky Business, Rain Man, Born on the Fourth of July, A Few Good Men, Jerry Maguire, Edge of Tomorrow and a number of his Mission: Impossible films.

Maverick sparked an interest in all of them!