What Really Pulls People into Theaters

What Really Pulls People into Theaters

They're a rotten crowd. You're worth the whole damn bunch put together.” – Nick Carraway, “The Great Gatsby,” Warner Bros., 2013

After all, this wasn’t the world’s first pandemic and unfortunately, it won’t be the last.

Tragic, yes; but almost immediately, it gave way to the roaring 20s – flappers, flouting prohibition, a construction boom and a significant rise in consumer spending.

It has been this way throughout history (https://bit.ly/3tmGnEh).

This one was no different.

Between Memorial Day and July 4th, the beaches and the bars were packed.

But our pool, BBQ, cooler was just as good, a lot more convenient … and not crowded.

Still, we were tempted to catch F9 at the theater to see Vin Diesel and his crew in action, but …

We loved the way Universal, and AMC hyped how huge the record attendance has been. 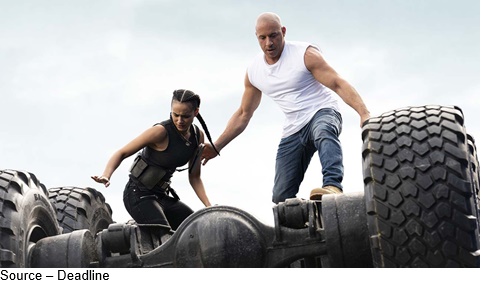 Almost as good as Warner/Universal and AMC did when Godzilla vs Kong was the first big theatrical release.

Warner’s Kilar and AMC’s Aron were telling anyone who would listen that it proved that the movie theater was still the place people wanted to be to have a complete entertainment experience.

Are you two kidding? 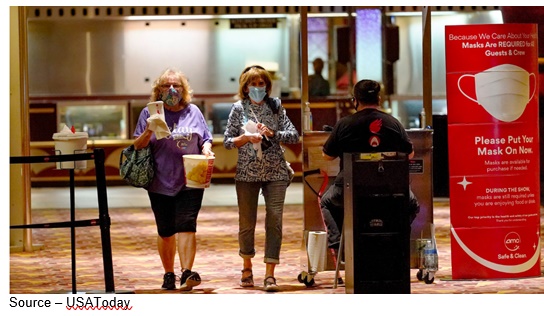 “We’ll keep playing by pandemic rules for a while,” said Allan McLennan, CEP/Media, Head of M&E North America, Atos.  “Consumers have proven that they are anxious to get out of the house when there’s a decent excuse for their entertainment and this bubble will probably continue into early 2022. For the time being, there will still be some covid-forecasting and exhibition management sensitivities.

“Remember F9 was also available free to HBO Max subscribers at the same time and while theaters were open, there were still seating restrictions,” he added, “But attendance was impressive, even with restrictions.”

Kilar and his boss, AT&T’s Stankey, said they had done a day/date release over their favorite streaming service – HBO Max – and it totally rocked!

Okay, so they didn’t release any viewership numbers or increases in subscriptions, but folks had spoken loud and clear – “they loved the film and watched a number of times.”

Still, Aron was happy because it let him justify his $20M bonus - double last year’s - and ticket sales delighted shareholders. 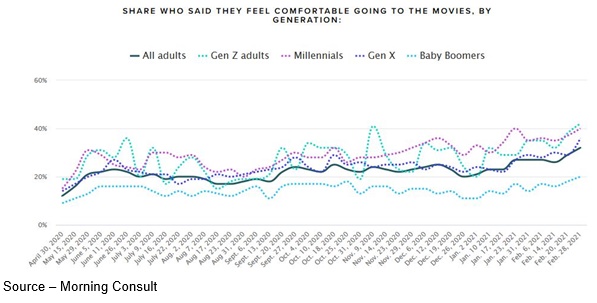 Easing Back – Parents and millennials are becoming more comfortable with the idea of sitting in a darkened theater with a bunch of strangers, knowing that safety protocols are being followed and that everyone in the household needs a break.

It didn’t take long for adults to say they’re comfortable returning to a movie theater.

Parents (33 percent) were slightly more comfortable with the idea of resuming moviegoing than adults overall, as were millennials (37 percent).

With each passing tentpole release, adults said they felt increasingly comfortable about going to movies while 15 percent of the folks said they would be heading back to movie theaters in two or three months.

The steady increase in ticket and concession sales showed they were anxious to put their seats in seats.

“Attendance proved people want the shared theatrical experience,” said McLennan, “and they’ve shown that they can deliver it safely and consistently if given the opportunity.”

Ticket revenue is projected to reach $15,192m this year and revenues are expected to grow 11.36 percent through 2024.

Still, there’s concern that this new elation could be a momentary bubble of excitement and people may slip back into old movie viewing habits.

Actually, ticket sales were off well before the pandemic and they may return to that level.

Ticket Slide – Ticket sales have been on a steady decline since 2002 but theaters continue to show profit because ticket prices and concession costs have risen.

Before TV, movies were the only place you could see a show, and over 60+ percent of folks went to the movies every week.

Today, the average person goes to a theater once every three months.

Fortunately, there’s a lot of profit in popcorn and sugarwater sales.

For a movie theater, the number of movies matters more than the box office. It’s attendance that drives the high margin concession sales and pre-screen advertising and fills unused screens.

This past year though, no studio has focused on increasing the volume of content for the theater. 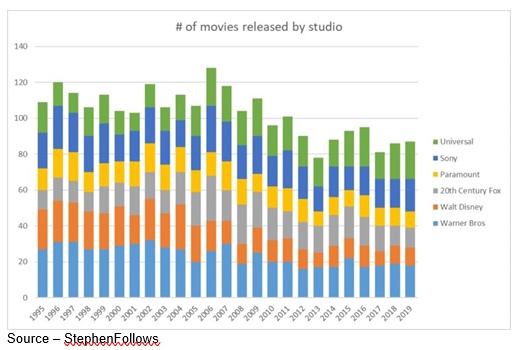 Quantity Down – While studios produce fewer films for theatrical release, they focus on key viewer interests – superhero, adventure.  Other genres are developed with DTC delivery.

The raw number of movies released by the Big 6 studios (Disney, Warner, Universal, Sony, Paramount, Foxy) has fallen from about 110 movies per year in the mid-2000s to down around 90 per year since 2010.

This is especially true for comedies and romantic comedies, which the Big 6 have essentially stopped making.

Instead, they have focused on building out and developing content for their own DTC service.

Even with the lapse in interest in the theater from both consumers and producers, studios continue to put pressure on the release window to allow them to monetize films as quickly as possible.

Disney is the only studio to date that has insisted on maintaining the theatrical release window, but it does come with strings.

Disney’s combined market share of the box offices is over 40 percent and the company’s dominance “suggests” the ground rules but still, they ensure there is enough profit for theater chains to stay alive.

Without a doubt, the pandemic has had the effect of collapsing the hallowed theatrical window to as short as 17 days (31 days for bigger blockbusters) versus 74 or so days in years past.

Early this year, Warner’s kneejerk reaction to the content situation was to release its entire 2021 slate simultaneously in cinemas and on HBO Max.

When Stankey said it was a win, win, win for theater chains, studios and consumers, the statement was roundly lambasted by … everyone.

Most studios shy away from a day-and-date strategy out of fear of cannibalizing ticket sales at the box office and infuriating talent and filmmakers.

Whither Profits – While it’s important for a film to have a good run in theaters, it isn’t for the added profits but for the build-up and interest it can deliver for other marketing opportunities.

With its merchandising, theme parks and other opportunities, Disney has perfected the profit cycle for its Pixar/Marvel/Star Wars/Avatar/Disney content.

Year in and year out, studios continue to push for early video-on-demand and will likely increase this pressure given the weakening position of theaters and the increasing pressure from streaming services. 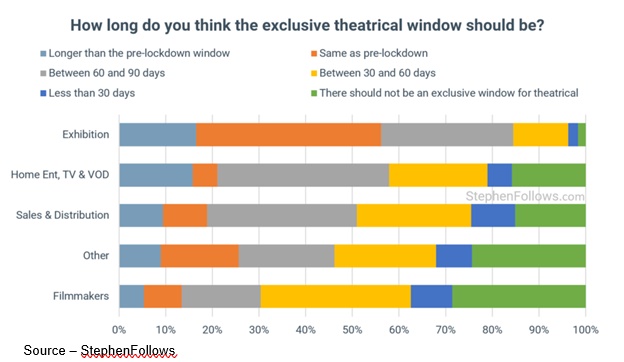 Window’s Return – The extended theatrical window won’t return because it really isn’t necessary to deliver the majority of movie house attendance.  Going forward, the window will be negotiated to maximize profits for studios and theaters.

Each studio has a different strategy for releasing movies in a post-pandemic world, one that often changes from film to film.

Disney is still aiming for some level of exclusive theatrical runs that will vary by film title.

Universal has been flexible as shown with its Troll/AMC/Cinemark theatrical/PVOD agreement with little interest in doing such dual release going forward.

Paramount’s 45-day window is most enticing to theater owners because it gives films seven weekends to make well over 90 percent of the project’s total gross.

But as the streaming battles intensify between Disney+, Paramount+, Peacock, HBO Max and others; there is no certainty if or when box office theatrical windows will end up.

“There’s progress being made in evaluating viewer engagement for both theatrical as well as streaming,” McLennan said. “Next year, studios and theater chains will be in a better position to agree on a general window length. Between now and then, they will be learning how each release does, one film at a time, and will adjust as needed.

“Movie theaters took a massive hit with being closed last year and are anxious to bring the audiences back,” he noted.

“With people increasingly interested in returning to the theater to experience the content, studios are anxious to have the best project debut possible--not just for the incremental revenue but also for the added global acceptance, coverage and recognition.

“Just as important, consumers have expressed a strong interest – at least in the near term – of returning to the theater experience as perhaps never before,” McLennan added.

For studios and theaters to maximize revenue, they need some level of theatrical window.

It won’t go back to the 90-plus day exclusivity (which was overkill) and may be 45 days for major tentpole projects, but it should support both parties and the consumer. 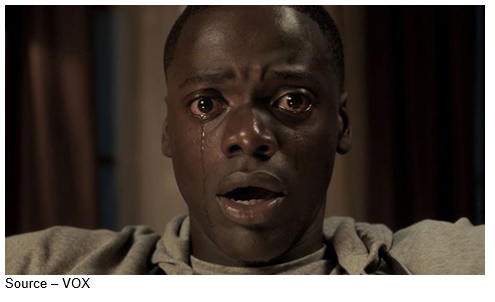 Get Out – As difficult as it is to believe, some people just don’t like to be in a dark room with a bunch of strangers to watch a movie.  Home viewing is just fine for them.

We know, it’s hard for you to believe there are people who don’t like to and don’t go to movie theaters for their entertainment.

Many go less often or not at all because:

At the same time, theaters and major chains are going to have to brutally reassess and reimage themselves for the audience. 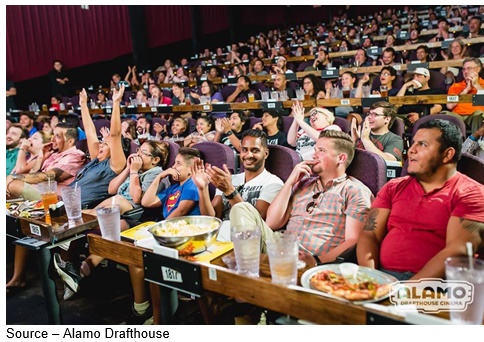 Fading – Large party environment movie houses and expansive facilities aren’t as inviting to ardent moviegoers than smaller facilities designed to maximize the individual experience for people, and the trend will continue.

Megaplexes with 10 screens were built with the idea that movie attendance was going to be expanding.

Instead of massive facilities and expensive long-term leases, the theaters will have to be smaller to provide a stronger interpersonal relationship for all attendees.

Chains will have to reexamine their luxury recliners, in-seat service and fine dining to determine exactly what they are and what they want to be to their ardent attendees. 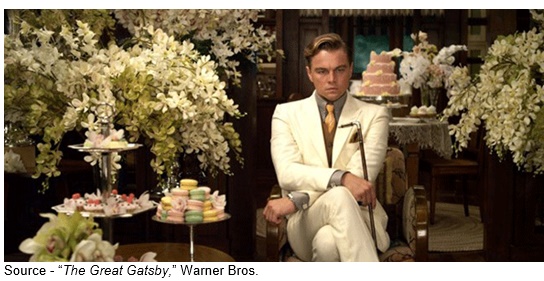 Consumers, studios and theaters all experienced and overcame a tough year, so now it’s time for everyone – especially studios/theaters – to evaluate and reinvent themselves to become more indispensable to the entertainment public.

It’s time to remember what Tom Buchanan said in The Great Gatsby, “Life is something you dominate, Nick! If you're any good.”

Come to grips with the brutal truth that the key reasons people go to a theater is that they want to get out, or you’ve convinced yourself that the move really needs the huge screen experience.

That means a blockbuster space adventure or a few superheros.