This is the essence of discrimination: formulating opinions about others not based on their individual merits, but rather on their membership in a group with assumed characteristics.” – Joe Miller, “Philadelphia,” TriStar, 1993

It should be pretty easy for Netflix’s bosses (Hastings and Sarandos) to be smug.

In 2007, the envelope stuffing company transformed itself into what is now the global reach streaming entertainment giant with 203M plus subscribers in 190 plus countries. At the same time, it acquired fresh video content from those countries to entertain folks in every other country around the globe.

Still not able to (yet) directly serve streaming customers in the Middle Kingdom, Netflix is not above acquiring and sharing Chinese-developed content for subscribers around the globe.

Three years after the #OscarsSoWhite social movement began, Netflix issued its first inclusion report prepared by Verna Myers, a veteran diversity consultant and the company’s first inclusion officer who bluntly told management, “You just aren’t as good as you think you are.”

Gawd, that had to hurt!

But at least diversity and inclusion have finally become the concerns and focus--not just for Netflix but for any M&E company that wants to grow and prosper nationally and internationally.

It hasn’t been easy, and it won’t be easy for the industry to reprioritize itself and, in turn, help the world’s viewing public change.

But we’re 100 percent confident it will happen because video content is a common language around the globe and the more, we see it as the natural normal, the more we’ll expect it.

Hattie McDaniel proved that it is a slow, arduous but achievable goal years ago when she put a checkmark beside all of the points people dream of when they come to Hollywood:

·         Has not one but two stars on the Hollywood Walk of Fame – one for radio, one for motion pictures

The entertainment industry can almost be proud of what it helped her achieve during her lifetime but:

·         She received her Academy Award in a segregated ceremony, had to sit in the back with the rest of  the cast

·         She was never offered a leading role but a supporting role, often as a servant

She was not only a woman but a woman of color.

Despite her accomplishments, even the NAACP complained because of her stereotyped servile roles. 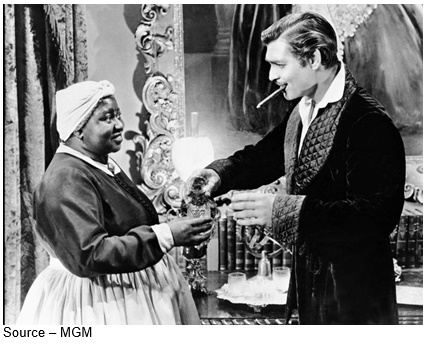 Hattie’s Reward – Hattie McDaniel was the first black woman to earn an Oscar for her supporting role in the now widely criticized film, Gone with the Wind.  Clark Gable not only poured brandy for her during the film but also threatened to boycott the premier in Atlanta because she wasn’t invited.

Her response was, “I’d rather play a maid than be one,” and “Why should I complain about making $700 a week playing a maid because if I didn’t, I’d be making $7 a week being one?”

She was right … they were right.

Even though it has been difficult the past few years as the industry struggles to address problems like #MeToo and #OscarsTooWhite, she probably would have been encouraged by the limited progress we have made  … even if it has been 82 years in the making.

Actually, there have always been roles for actors of color or alternative lifestyles, but they were mostly stereotypical.

Eliminate the stereotype and the results can be surprising, breathtaking.

A few Sundays back, we decided to take a break and watch a no-brainer Tubi film.

We scrolled by something from 2016 with Eddie Murphy on the cover called Mr. Church.

Figured what the heck, should be funny with Eddie in it and certainly won’t require a lot of  heavy thinking.

The movie was filled with touching, unconditional love. 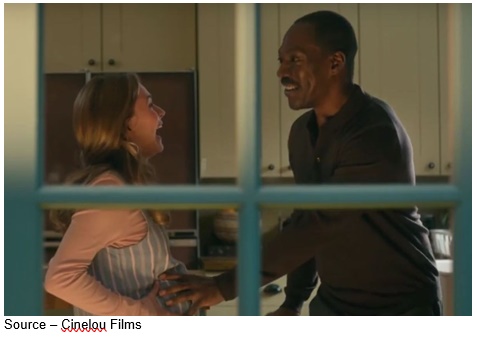 Family Bond – A six-month arrangement turns into a delightful family bond that lasts forever between a dying mother, her daughter and a talented cook.

Our daughter choked up, left the room.

We got something in our eye.

Made us think there are probably hundreds of video stories we missed or deliberately passed on because we “knew” what it was going to be like.

We wondered how many male/female/BBOC/LGBTQ people in the industry never got their chance because they didn’t “fit the mold” as a producer, director, crew member, actor.

Thanks to the company’s annual inclusion report and Netflix management’s understanding, or at least it’s awareness that it needs to look for candidates in nontraditional ways, it is creating opportunities for Black candidates. Programs include its Netflix Virtual HBCU Boot Camp and partnering with organizations like  Techqueria and Ghetto Film School to strengthen bonds with Black, Latinx, LGBTQ+ and Asian American candidates.

They are also showing the industry that diverse storylines are good for the bottom line because they are attractive to its global viewer base. 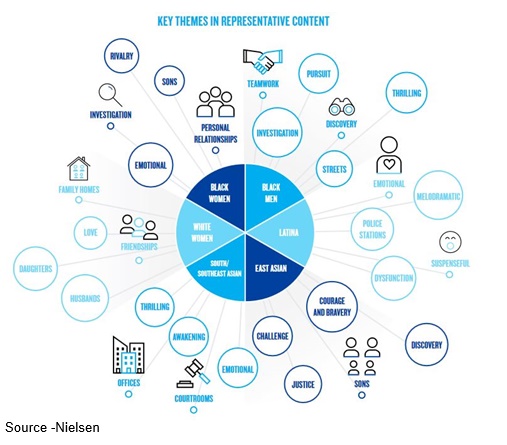 Touch Points – No film will ever touch all of the content themes perfectly so the project will appeal to every viewer.  The key is to balance the themes properly to reach, influence, affect your target audience.

Starlight Media’s Peter Luo recently highlighted his organization’s Stars Collective program designed to bring along young people from across the spectrum to develop tomorrow’s content that have just the right balance of social, artistic and commercial value that will play well on both sides of the Pacific.

And they aren’t alone.

Slowly, the industry is recognizing that issues like diversity/inclusion aren’t problems but rather opportunities they need to address head-on.

This season, five women were nominated for best director Oscars but for the Golden Globes, none of the black-led films were nominated.

Are you folks kidding?

They weren’t just good, they were darn good – One Night in Miami, Ma Rainey’s Black Bottom, Judas and the Black Messiah, Da 5 Bloods.

The worst recognition was that the two male nominees (David Fincher, Aaron Sorkin) had budgets of tens of millions to produce their films.

Either the guys got too much, or the gals got too little or …

Telling Storyteller – Actor Delroy Lindo discusses one of the scenes to be shot for Da 5 Bloods with director/producer/co-writer Spike Lee.  It mattered.

Spike Lee’s Da 5 Bloods was on a bunch of Britain’s BAFTA long list categories (and on a number of US award lists) except on the best director list … are you “kidding” us?

Korean director, Bong Jung-Ho made history last year winning the best English language picture Oscar for Parasite, but it was like the Academy said one foreign - especially Asian - winner was enough.

And that’s on a good day.

You have to have a great story to begin with; then a team that encompasses just the right mix of every race, class, gender, sexual-orientation, age, religion and social situation to help the project appeal to the broadest possible audience.

Sure, you have to satisfy underwriters, studio/theater/channel/streaming service executives; political/societal groups plus award committee members (peers); and just for the heck of it, the entertainment hunger of ticket holders and sofa viewers.

It’s no wonder people in this industry have huge egos, thin skins, an ultra-sense of paranoia and a fire-in-the-gut need to share a story with the world.

We’re especially glad for their desire – and creative ability – to tell a story and point a spotlight on an issue in a natural, educational, informational and entertaining way.

For example, years ago, when we were flying regularly for business/pleasure, we  rented the movie player for an extended flight and decided to watch what seemed like a no-brainer film, Hidden Numbers. 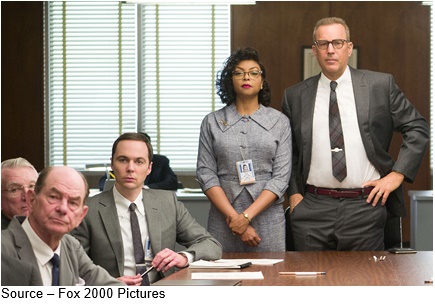 She Counts – Astronaut John Glenn wasn’t ready to go to the moon until Katherine (Taraji Henson) said everything was a go to Glenn and Katherine’s boss Al Harrison (Kevin Costner).  Oh yes, everything went as planned.

First, we thought it was fiction because women couldn’t be minimalized like that in a professional organization.

Then we figured out, “holy crap, that wasn’t that long ago, and folks did that?”

We wondered why would a woman walk so far to go to the bathroom when there was one just down the hall.

Figured it out when Costner smashed the “other” bathroom sign and said no more!

Well, at least John Glenn got it right when he said he was ready to go if “the girl” checked the numbers.

Okay, maybe we wouldn’t have jumped on a rocket that had less computing power than our iPhone but still …  You get the idea.

Diversity/inclusion has been a complex, whispered issue for a long time.

Doing the right/natural thing is finally becoming important because people want and expect to view content that includes people like them with content that resonates with them.

Disparity – One of the keys to a successful film/show is to include people who look and sound like you.  Things are still out of balance in the US film and home content industry, but the situation can be corrected by focusing on the issues and solutions.

The problem is it won’t happen overnight, and it won’t be easy.

Some say to simply establish quotas and BAM! a diverse workforce for the industry will happen.

The problem with this approach is that organizations fill quotes to fill quotas.

People get jobs they aren’t trained for and aren’t qualified for. Without proper training/mentoring, they fail the company and themselves.

Instead, Netflix took the more enlightened approach--find and place the best possible individuals in each position and work with them to succeed.

Starlight is pursuing a similar goal with their initiative.

To prosper, Netflix -- and every organization inside and outside of the M&E industry -- still needs to focus on quality and the potential of the individual, not a sex, ethnic, orientation number.

At the same time, firms need to work with institutions and organizations to interest and prepare the next generation of women and minorities to prepare them to develop/deliver tomorrow’s content -- executives, producers, directors, cinematographers, production/postproduction crew members.

As Anita Hill, of Brandies University said, "The entertainment industry has the unique potential to tell the stories of today’s richly diverse world. But to get there, the barriers to underrepresented people being valued and in the room where it happens must be eliminated. And once they do get into the room where it happens, they must not be the only one."

There are a couple of reasons diversity and inclusion are important to Netflix, Starlight as well as the entire M&E industry. 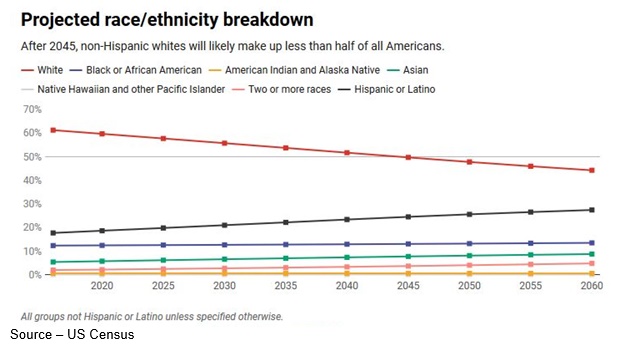 Racial, Ethnic Shift – By 2045, whites will make up less than half of the US population and will be one of the multiple minorities in the country.

People are attracted to films/shows that include people who talk, look like them.

In other words, more important than diversity quotas and requirements, the diversity of thoughts and experience produce not only a better video project but a more broadly accepted film/show.

To improve diversity at all levels - especially in the content you see - Netflix co-CEO recently said the company will invest $100M over the next five years to support underrepresented communities looking to work in the content industry. 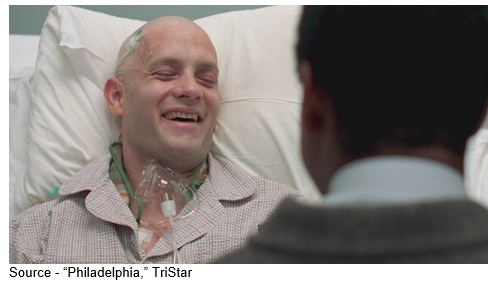 Winning at the box office and the award events is similar to Andrew Beckett’s experience in Philadelphia Story when he said, “It's that every now and again - not often, but occasionally - you get to be a part of justice being done. That really is quite a thrill when that happens.”