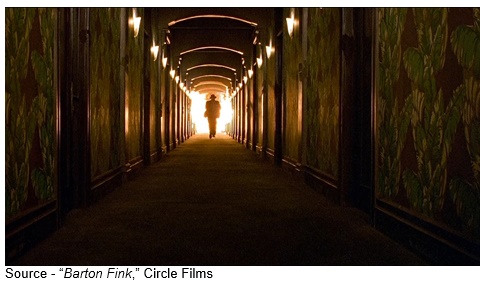 “The common man will still be here when you get back. Who knows, there may even be one or two of them in Hollywood.” – Barland Stanford, “Barton Fink,” Circle Films, 1991

Winston Churchill was right when he purportedly said, “Never let a good crisis go to waste.”

Of course, we doubt if he ever imagined we’d ever be so deep in … stuff.

Film festivals are meekly lifting the curtain with new great content, new rules and fingers crossed that the only thing that takes people’s breath away are the new visual stories.

Studio and production executives watched how Paramount and Tom Cruise handled the MI:7 and MI:8 production and Covid-19 in Surry, England.  Don’t worry, Top Gun: Maverick is already in the can and set for a Christmas release.

Those folks are also kept a close eye on how Universal, Jeff Goldblum and crew handle the production of Jurassic World: Domain in London’s Pinewood Studios.

Theater owners are putting on their smiley face as they brave the uncertainty of exactly how long it will take for people to pour into their venues and widely scattered seats to make a night out at the movies a real, regular thing again.

The owners and Hollywood crowd gave a slight sigh of relief when ordinary people seemed to understand and get excited with Warner Bros./Christopher Nolan’s Tenet.

Enough people were desperate enough to get out to earn $100M plus/minus in the convoluted film’s first week (probably given a little boost by a masked Cruise grabbing a seat and saying he loved it).

But with the pandemic still causing concern for studios, theaters and viewers, Disney’s Bob Chapek wanted to ensure he leveraged the much-delayed live-action epic Mulan as much as possible.

The company skipped US theaters and served the film up as a premium ($30) on Disney + (elsewhere folks had to venture into continuously cleaned movie houses to see the action). 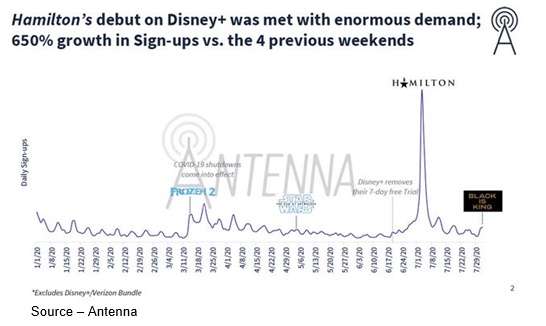 Spike – Who would have thought it?  You give the marketplace something really cool and special and they’ll sign up for your streaming service BAM!  Combine periodic dynamite content offerings and a library everyone wants to view and the money rolls in.

Okay, Disney wasn’t the first to bypass cinemas – Universal did it first with Trolls World Tour, racking up $100M in PVOD sales – but the Mouse House was looking toward its future.

Hamilton gave Disney+ a big subscription lift and Mulan could help Disney produce $11B in DTC offerings, behind the world’s frontrunner, Netflix, which should earn more than $25B this year.

Disney did throw theater chains a bone by saying the two would be released in cinemas this next year for people who wanted to see the big projects on the big screen.  However, they aren’t really committing as to how many days/weeks they get the films exclusively or how quickly Disney+ offers them as PVOD or SVOD.

We’ll work on that!

Warner’s Jason Kilar might have moved Tenet to HBO Max except for the fact that Nolan insisted that the confusing time-travel spy film needed the big screen.

At the same time, Kilar had enough on his plate just cleaning up all the loose ends after firing/hiring folks and mashing together the Warner operations in a newer “better” way.

He totally missed the idea that the better way might – just might – be in the hands of Discovery’s David Zaslav…ooppss!

The entire M&E industry has been turned on its head by the pandemic.

Studios around the globe suddenly had major and secondary projects ready-to-go and were itching to recover as much of their investment as possible, as quickly as possible.

Theaters were menacingly dark with no real idea how soon they’d be able to turn the lights back on and how long before mobs of people would rush back to get their movie/popcorn fix.

Adding insult to injury, the tech-driven streamers were making it fun and easy for folks to lock their front doors and watch the most/best content in their sweats with their own popcorn.

The global lockdown had helped Netflix grow its subscriber base to nearly 200M households and Amazon Prime to 160M around the globe. 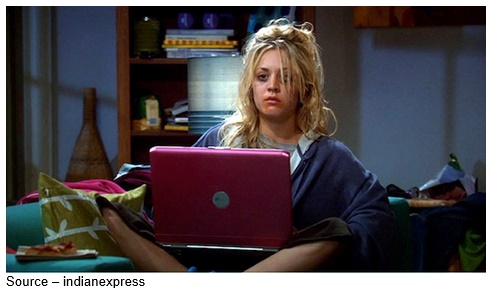 Excessive Consumption – People didn’t really believe they could watch as much as they wanted, where they wanted, when they wanted, so they put streaming services to the test.  It worked and people hardly noticed they hadn’t gone out for days.

If that wasn’t bad enough for the empty seaters, it looked like everyone had thought sending content direct to people’s home was a way for them to strengthen their relationship with consumers.

-          Most people define their streaming services as TV viewing

Despite the fact that they were making it really easy to watch premium content at home, studio leaders have assured theater owners that when the time was right, they would be there for them.

Universal’s boss, Jimmy Horowitz, showed he was a man of his word by agreeing to give AMC’s Adam Aron – and by implication other chains around the globe – first crack at killer films like Jurassic World: Domain, F9 and other comic book adaptations and franchise fare that should put seats in seats.

Oh yeah, AMC will also get a portion of the PVOD sales and all it will cost them is putting the exclusivity window on a diet from 90ish days to 17 days. 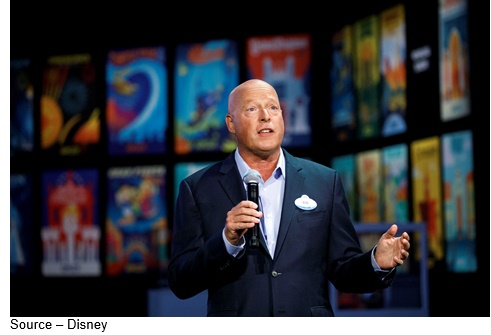 Disney’s Chapek said he was a man of his word - in light of the fact that Universal had paved the way to a better exclusivity window and people had enjoyed their pay-for-view experience – and that the company’s theatrical-first periods are negotiable.

Of course, he can say that with confidence since Mulan and Black Widow racked up big sales in the America’s with the streaming content as well as extremely good ticket sales around the globe. 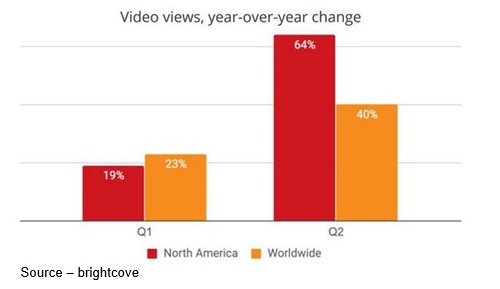 Keeping Up – The pandemic lockdown certainly gave streaming a big boost with young and old around the globe; and while it’s doubtful if people will continue staring at a screen that much in the future, streaming will continue to be strong.

“The growing acceptance of multiple VOD options (Paid, Subscription, Ad supported) by consumers and studios is a triggering event that will from here on change the M&E industry,” Allan McLennan, CEP/Media, Head of M&E North America, Atos, said.

“What studios and project owners are preparing for is when audiences begin to return to theaters is to optimize the exposure throughout the distribution chain,” he added.  “There are audiences who want the theatrical experience and there are those who enjoy the content in the comfort of their home over their subscription and/or AVOD channels.  Studios now have options that will make their content more available, better and to larger audiences.” 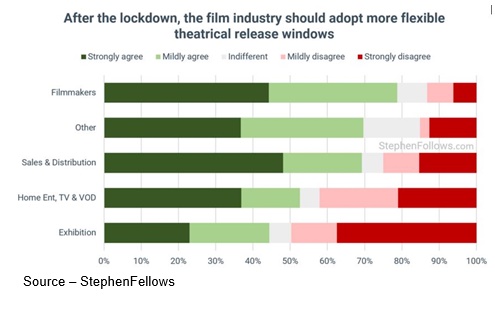 Breaking Windows – Covid-19 forced the closure of movie theaters around the globe, so studios took their content direct to the consumer.  But as cinemas opened, logical people knew that ticket sales would be weak for quite some time.  So Universal and AMC did the unthinkable, they modified their exclusive run window from 90 to 17 days (plus some incentives).  Now, people are beginning to question the validity of the exclusive showing window in the 21st century.

-          Use PVOD and theatrical windows sequentially, similar to Universal’s recent deal with AMC

In 2019 BC (before-Covid), theatrical windows were the accepted standard for studios/project owners-- especially when top-tier, tentpole projects were involved.

Disney, Paramount, Universal, Sony, A24 and others had perfected the fine art of marketing, building awareness/excitement for the movie delivering the maximum excitement/interest possible in the US and then taking it global to maximize sales. 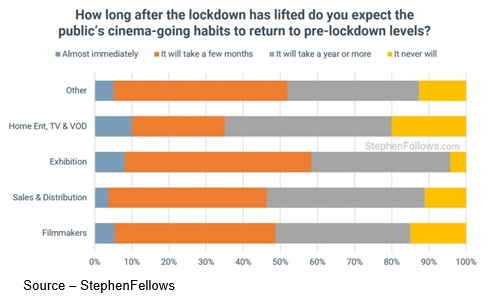 Come on Back – A major question for everyone in the M&E industry is if movie houses will ever return to their leading date position; and more importantly, how long will it take?  No, we don’t know either.

Ultimately, the film ended up on Pay TV or a streaming service.

The pandemic which closed cinemas made it important for studios to switch to DTC – SVOD or AVOD, depending on the “consumer value” of the video story.

At the beginning of the 2020 global lockdown period, while theaters remained closed and forecasts as to how quickly people would return to the movie house were dim, studios including Universal, Disney, Paramount gambled on their earlier film marketing investment to attract the maximum number of paid streamers.

The studios also made a commitment for theatrical showings of the films nationally and internationally as we entered the PC (Post-Covid) period.

With the successful launch of their Disney + SVOD service last November, the service has more than 64.5M subscribers worldwide plus Hulu and India’s Hotstar subscribers and has proven with the successes of Hamilton and Mulan that consumers will pay for the opportunity to view top-tier films early.

With signs that modified normalcy is returning, Universal and AMC agreed on a mutually beneficial 17-day window pact for tentpole productions.  The window-shattering agreement provided meaningful earnings for both the cinema and the studio.  It also enabled the studio to increase revenues on mid-, lower-tier releases.

The adjusted exclusivity window agreement has already become the starting point for studios and theaters around the globe.

“Depending on the strength of the project we believe we’ll start to see potentially more simultaneous theatrical/PVOD releases going forward,” McLennan observed. 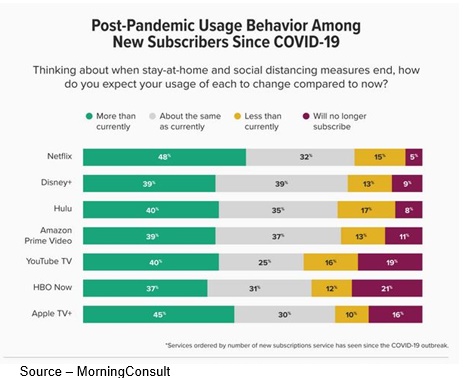 Learned Behavior – In the past six months, more and more consumers have found it makes more sense to watch the shows and movies you want to watch on your terms rather than “the man’s.”  People not only cut their Pay TV, they also added more streaming services for … more content.

“We have viewers who want to venture out and enjoy a great film like MI:7, Matrix, No Time to Die or John Wick 4 while a few – 40 percent of potential viewers – would prefer to see the film on their home screen,” he said.  “It will become audience optimization versus dilution.

“In the long term, it will be good for everyone in the ecosystem--especially the consumer,” he added

But the transition to the new pricing model won’t happen smoothly.

Buying a movie ticket is $X for one ticket while PVOD or SVOD will be a single transaction that friends/family get to enjoy. But we believe studio executives and project owners will learn to accept this just as they have come to recognize pirated viewing as a “marketing cost.”

In addition, PVOD pricing will become a mixture of science and art.

Studios and producers will have to focus on the consumer value of the film rather than the inflated value of the project based on what the other guy/gal charged.

Trolls was a reasonable value at $20 while Mulan and Black Widow, at $30, was arguably at the higher end of the value scale.

Studios and project owners will have to take the emotion out of establishing the PVOD price if it is warranted; and if not, the film should go direct to subscription or ad-supported service. 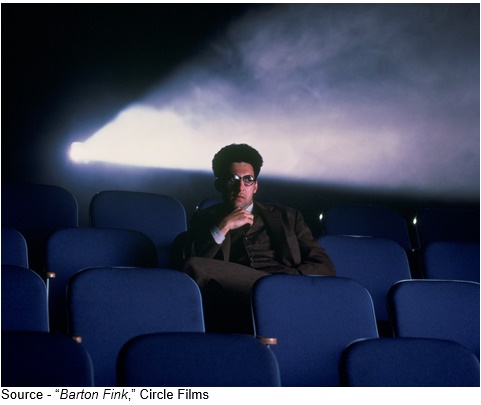 Creators know only too well what Barton Fink meant when he said, “I've always found that writing comes from a great inner pain.”

Studio management and accounting folks will now have to experience their own inner pain to ensure they maximize profits.