Solution to Managing the Streaming Budget 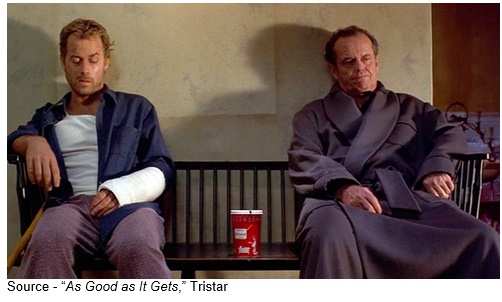 Maine’s Senator King had a really cool idea for streaming services to give to the 128.45M households in the U.S.

He proposed free streaming because that would keep people home, keep them entertained, keep them from thinking about traveling back when that was unpopular.

A helluva an idea!

Netflix, Disney + (the full bundle with Hulu, ESPN), Discovery/WarnerBros, Amazon Prime, Apple TV+ and 200 plus streaming TV services wondered why they didn’t think of that.

Give away what you’re in business to sell.

In Senator King’s defense, he didn’t suggest giving the service free to everyone. Instead, just make them available for non-subscribers.

But why would we pay for our five services if we can get them free … courtesy of Senator King?

The senator probably didn’t realize that there are already free streaming services.

They’d love nothing better than to sign up every household in the country to give them “free” entertainment. 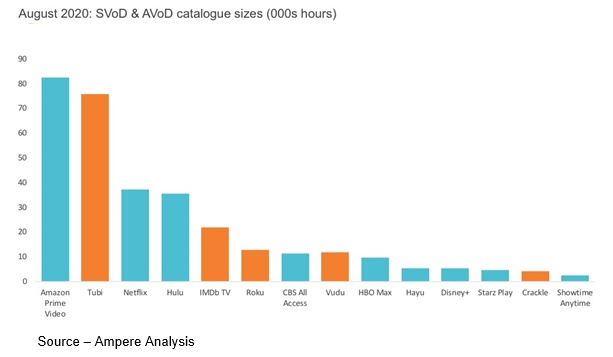 Variety – Whether subscription or free, the stock in trade for VOD services is their library of shows/movies with the depth and breadth to interest and keep viewers.  The libraries are constantly changing.

That’s what Tubi, Pluto, Roku, Crackle, IMDbTV, Vudu and a bunch of other organizations were formed to do – put together a roster of shows/movies/stuff and make it available to you without a monthly subscription fee.

There’s a key difference between subscription entertainment and “free” entertainment – if you’re not paying for it, you’re the product.

At least for now, there are fewer ads than with your old Pay-TV bundle, they’re shorter and the sound doesn’t rise 10 dB when they come on.

But they still suck! 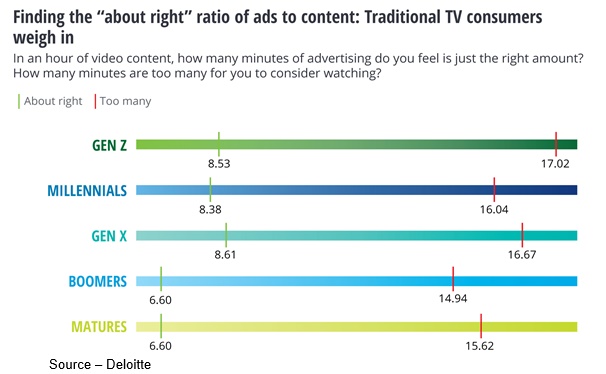 Too Much – People don’t really hate ads.  They simply dislike the number of ads in a viewing session and having the same ads hitting their screens again and again and …

The ad-supported streaming TV folks run about 3-5 minutes of ads per hour.

According to Deloitte, the U.S. AVOD folks could – and ultimately will – run more ads but companies cut their marketing budgets during the pandemic. 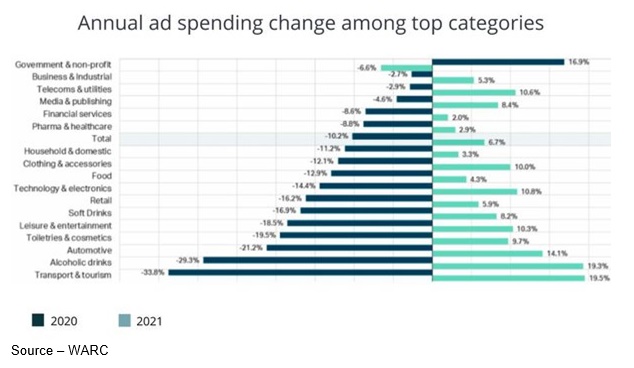 Down, Not Out – Businesses across the board cut back their advertising budgets during the pandemic which is why you saw so many public service and election ads. Fortunately, that is going to change as we begin to become accustomed to the new normal.

It will also take time for them to really understand how to build ads that take advantage of IP technology – customized to you, your interests, entertainment choices – rather than sending a pre-packaged message that is the same 30-second spot you’ve seen for the last week of watching content.

Still, we don’t understand why more people in the Americas don’t make ad-supported streaming the first choice when they cut or shave their cable bundle as they do in Asia.

That’s probably just another problem you can blame on Netflix but give Comcast, Charter and the other cable bundlers credit--they did have a good thing going there so … why rock the boat? 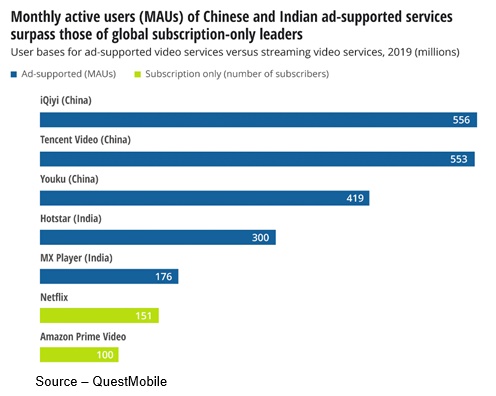 Big Players – Asian viewers might be just a little more frugal with their money because for them, the ad-supported (free) content services are more widely accepted.  And the services are expanding their horizons.

Netflix, Amazon Prime and now Disney + have a real tough time convincing people to spend a few rupees or renminbi in India, China and other countries in the area to stream their original entertainment.

Over a billion people in Asia watch ad-supported TV services using affordable 4G connectivity, low-cost smartphones, and the ability to trade a little bit of attention for free TV shows, movies and sports.

Some of the Asian streaming entertainment services are building huge user bases plus the cash flow to develop their own subscription businesses with original content, sports, music and gaming (gaming is huge in Asia).

Nearly 50 percent of Indian smartphones have the Hotstar mobile app and a lot of the shows and movies are free.

To access premium content such as Disney + entertainment – Disney owns Hotstar - users pay for a subscription that gives the mouse an inside edge to a very large and growing market.

As you can see in the chart above, China; with a population of about 1.5B people; has the world’s largest ad-supported streaming content services. Baidu, Alibaba and Tencent have roughly 500M MAUs each.

However, in the Americas, people were more interested in having an ad-free experience – perhaps thanks in part to the ad bundle growth – for their anytime, any screen entertainment.

Networks, studios and tech firms launched rich, exciting services each with “reasonable” subscription fees and idled/bored consumers signed up for each new service that delivered the show(s) they just had to watch.

Unlike the more expensive pay-tv bundle you left behind (or never had), switching from one channel (or in this case one service) to another isn’t possible because their content is unique, better and behind their own subscription door. 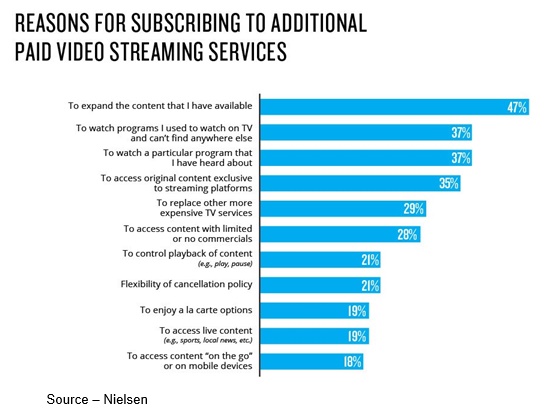 More, More – There are a lot of reasons people add and drop streaming services but it’s easy to see the demand is growing.

So, folks trialed and added another service and another…

NPD Group recently noted the emergence of “subscription fatigue” as people become frustrated with managing and paying for more subscriptions to get the exclusive content they want to view.

Toward the end of the year, they reported that the number of services people subscribed to grew from five to seven.

To control their entertainment budget, people are increasingly becoming selective – retaining their most widely used subscription service and adding one or two ad-supported services to give them added variety without an increase in cost. 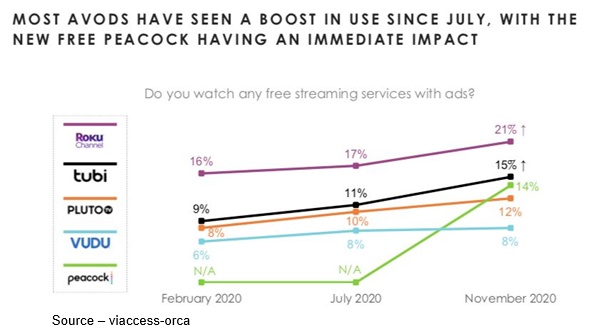 New Interest – While the streaming industry grew out of the fact that people were tired of the same old monotonous ads, AVOD services have become increasingly popular because it offers interesting content and people feel they’re spending too much for their subscriptions.

And they’re finding that the ad-supported services are pretty darn good!

Especially since the volume/frequency of ads remain low and the cost of subscriptions go up “regularly” as did people’s old pay-tv bundle.

We expect that as the services mature, they will also broaden their entertainment offerings as the AVOD services did in Asia adding games, music and other entertainment to their platform.

Then, as the economy improves and marketers begin to understand that there are more effective, more efficient options than social network and search engine advertising, budgets will shift, and the ad-supported streaming folks can invest in added content and services. 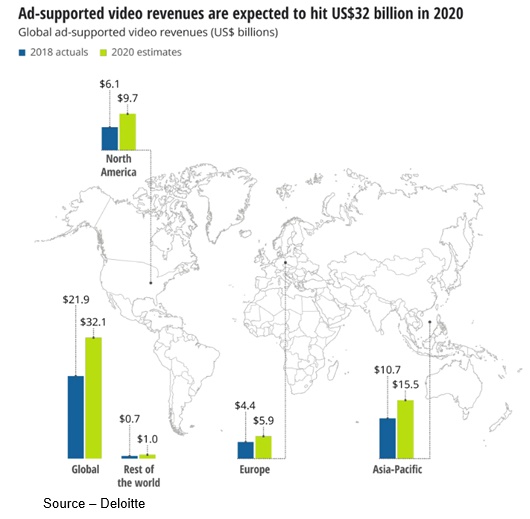 Think of AVOD as another import the Americas have gotten from Asia.

And … the price was right for everyone.

The biggest challenge for AVOD services in the Americas is to get out of their own way.

Revenue from free ad-supported video-on-demand services rose to nearly $27B globally last year and the growth potential for the services, advertisers and consumers is excellent if….

Yes, it’s a big if and most organizations have the challenge of understanding that just because you and your neighbors know they exist, it isn’t translated into “everyone knows about us just ask Bill, Jane, George, Pauline, Rene, Mark…”

Just because your Zoom group knows about the service(s), the depth/breadth of content or even that there’s more on-demand entertainment that’s available beyond the subscription leaders.

Secret Service – AVOD services have done an excellent job of amassing a library of interesting, informative content and their user interface is getting better and better.  In addition, they are growing internationally beyond their own borders.  But they have a long way to go to build awareness to attract their target audiences.

In fact, a Magid report said that ad-supported services had plenty of room for growth in the Americas because AVOD is one of the best kept secrets in the industry.

True, Anthony Wood’s Roku channel leads the pack (and yes, they’re very good) but still, they only had 32 percent awareness.

Hunt, Find – Every streaming service has their unique idea of what it takes to make it easy for people to find the content that interests them.  If you have nothing better to do, just browse through their “TV Guides” and find something that reaches out and grabs your attention.

But there are some darn good services in the roster including Tubi and Pluto.

And the free service we really like, IMDbTV didn’t even make the top dozen!

You’d think that Bezos would encourage his Amazon folks to throw the attractive stepsister a few mentions now and then.

Maybe instead of sending us more “here’s something we found we know you’ll like” Amazon emails, they could send us notes telling us to check out the new – and old - free shows/movies that have been added to the industry’s online database and streaming service.

We appreciate the fact that you don’t really like ads (we do, but that’s another story). The fact is ad-supported services don’t overwhelm you with mind-numbing messages the way traditional TV services do.

As we said before, you don’t have to sit through 15-20 minutes of ads per hour just to watch a show or movie.

True, you won’t find The Queen’s Gambit, Alone, Mandalorian, The Right Stuff, The Morning Show, For All Mankind, The Undoing, Raised by Wolves or other content the SVOD services paid big bucks to develop/acquire; but you will be surprised of how many great projects you never watched before.

What you can find with a little scrolling are some great indie films and a lot of them are outstanding … trust us!

Who knows, the AVOD services may be just the content sources Senator King was thinking about when he asked Netflix, Disney, Amazon and the rest to go easy on people stuck at home doing nothing but staring at their screen. 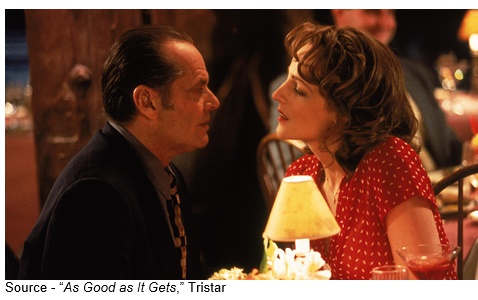 After all, they’re already up and running and ready for people to sign in so we certainly need more entertainment options.

Or as Melvin Udall said in As Good As It Gets, “Just what the world needs, another actress.”