Even though it takes many shapes and forms today, sex still sells.

The next sure-fire selling idea is fear.

Ring and the other eyeball doorbell systems are everywhere because they can help you identify bad people around your home in time to scare them away and get assistance.

So, what if the police can tap into your system to check the neighborhood.  Just more security.

To get really close with your significant other, nothing beats the scary stuff like Frankenstein, Freddy, Alien, Nightmare, Birds, Saw, Mist, Halloween, Exorcist, Texas Chainsaw and It.

But forget the creepies, fear of the unknown not only scares you silly but sticks with you like Contagion, World War Z, Outbreak, Omega Man, Pandemic, Andromeda Strain and Outbreak.

Yep, they’re enough to make you stay home from the office and use Zoom or TeamViewer to conduct your work and only poke your head out when you have to get more supplies.

Go to the movie?

If you’re in China, that’s out of the question because the government shut them down when COVID-19 began to spread, wiping out one of the theater chains’ biggest profit periods, Chinese New Year.

Last year, China’s box office hit a record $9.2B ($1.5B during the New Year holiday), more than 20 percent of worldwide revenues.

This year, the key holiday generated just $3.94M in sales, according to Artisan Gateway.

As the virus spread across countries and around the globe, people began to avoid large gatherings and movie attendance thinned out. 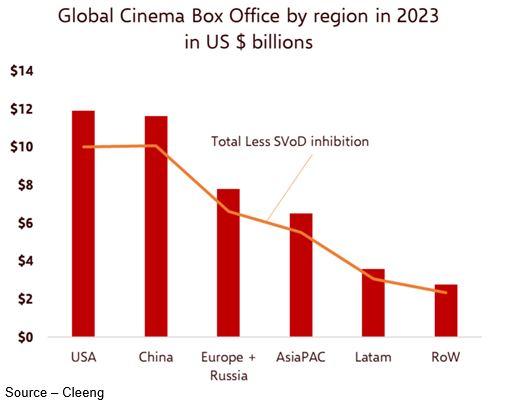 Entertainment Convenience – Gen Alpha/Zers have already had a negative impact on theater ticket sales because they can watch the stuff they want to watch on their screens.

Actually, movie theater attendance has been slipping for years, thanks to the desire to collapse in front of a TV to watch whatever they wanted to show you; and it accelerated when folks found they could watch what they want, when they want.

To compensate for the falling ticket sales, studios and theater chains focused on what they hoped would be major/tentpole productions to attract audiences, even as the time to TV airing shrunk.

In addition, they raised ticket prices to convince shareholders they had met their numbers.

To continue the profit drive, buckets of popcorn got smaller and more expensive.

Using ticket sales as a measure of a movie’s success or failure is becoming less important.

The health concern of sitting in a theater with a bunch of strangers only accelerated the change.

Showing on the big screen still matters to producers, directors, crew and actors but people’s entertainment consumption habits are changing.

But the idiot box was an overpowering siren call.

Networks were making money hand over fist as the TV set went from a casual relationship to a habit, “hey it’s 8 o’clock, it’s time to watch (whatever).”

There were only a couple of problems:

-          Remembering where the specific station/show was on the dial

The cable guy had a solution to feed your habit:

-          We’ll charge companies to get their products in front of you and sell them more of your viewing time because … we can.

Cable Change – The maligned cable guy has actually done a pretty good job of modifying services over time to remain relevant in folks’ homes.  When people “cut the cord,” they really only shift viewing preferences on the cord serving the home.

People got the entertainment they needed (hooked, remember).

Networks, content distributors and advertisers were sorta’, kinda’ happy; despite their increasing costs for the privilege of reaching more and more viewers with “free” entertainment.

Of course, there were still folks who wanted to go to the movies without going to the movies, so some entrepreneurs got the idea of letting people choose the movies they wanted to watch and send them through the mail in readily identifiable red envelopes. 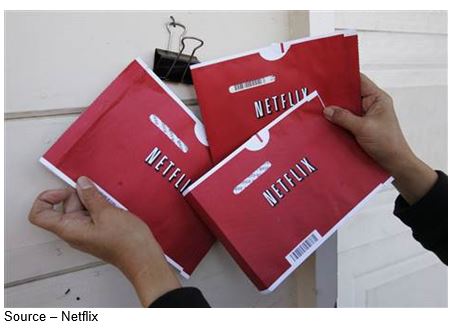 Red Envelopes – Netflix began the evolution of personalized content viewing with its “dreaded” red envelopes.  Then, as iNet bandwidth and reliability improved, they moved to “instant” content delivery around the globe.

People were happy.  They picked the movies/shows they wanted to see, requested them and BAM! they were delivered.

The post office was happy because suddenly it had a new source of revenue to offset the fact that folks were emailing each other rather than sending letters and advertisers were reducing their ad mailings because it was faster and cheaper to dump them into your inbox every day.

Movie theater folks weren’t happy because they wanted to keep people from getting discs as long as possible so they could put seats in seats.

They also wanted the same buffer for TV airing but that was a compromise because studios and networks were blood relatives.

The only people who didn’t have much of a say in the discussions/negotiations were the indie creatives, filmmakers and crews.

Gatekeepers still held sway over when, where and how people were able to see, enjoy their efforts.

Of course, the tech industry wanted more of everything as the world increasingly became more digital from beginning to the end.

Today, the wired/wireless internet reaches into almost every corner of the globe, providing access to more than 58 percent of the population (4.5B people).

Still, moving big 4K video files across town, across the country, around the globe was a challenge for content owners and consumers.

Some brave soles were willing to endure the frustration of buffering and screen freeze, but most folks just wanted their entertainment smooth and easy, so they stuck with their cable guy.

It took some ingenious people with a vision, a lot of front-end investment and an expertise on how to move huge files from the point of origin to the customer’s screen to solve the problem. 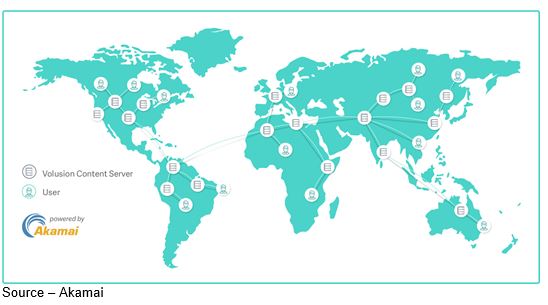 Instant Delivery – To provide “instant” content delivery, firms like Akamai built out global networks of servers that could quickly and reliably deliver content to the consumer on the screen of their choice. It’s much more efficient and effective than feeding content from a central server.

In addition to expanding the capacity of the internet and developing bandwidth-efficient codecs (encoder-decoder), they also located servers around the globe, so content didn’t have to travel as far when people called up their content.

Content distributors had a new efficient, effective way to serve their stuff to viewers.

Using a strong mix of enhanced tech delivery, an aggressive program of content development and licensing combined with the promise of watching what you wanted, when you wanted and as much as you wanted without those pesky ads, Netflix quickly became synonymous with streaming.

More importantly, it opened the door to a new entertainment habit that folks immediately accepted as the new normal. 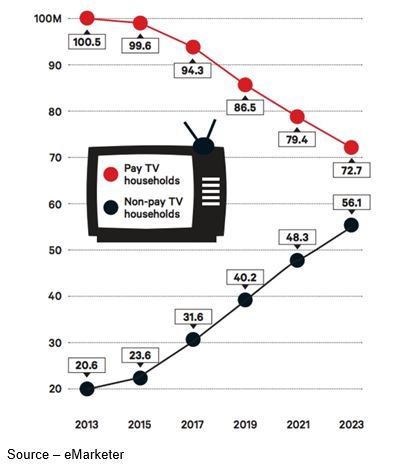 Missing Appointments – While PayTV will continue to have some regular customers, the younger crowd will opt out and go with the convenience of content on their terms, their screens.  Death isn’t inevitable but they will have to adjust.

Studios and content distributors saw how successful Netflix was in going D2C in the U.S. and increasingly, around the globe (167M subscribers in 192 countries).

They didn’t miss the fact that Amazon Prime had 150M subscribers around the globe.

While it’s been a little tough to figure out Google’s YouTube TV bundle, they are reaching eyeballs and more importantly, younger eyeballs that will grow up and replace boomers and beyond.

Hint:  Get ‘em early when they’re just forming habits and it will be tough to switch them.

All at once, instead of a pay TV bundle of hundreds of channels, people have their choice of more than 200 subscription options in the U.S. and similar ratios in countries around the globe. 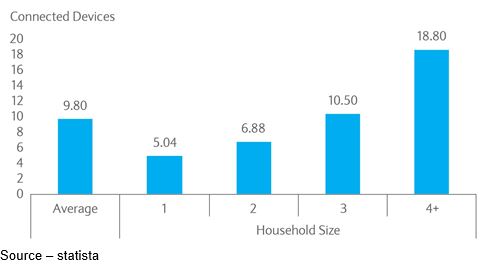 More ‘n More – With a growing number of connected devices in the home, the “discussion” on what we will watch this evening becomes one of each individual’s choice.

Consumers can have the convenience of watching their entertainment on any device they want – TV, computer, tablet, smartphone.

Of course, there’s a little catch – isn’t there always?

No one is satisfied with just one streaming service because the other guy is offering a movie or show they just gotta’ watch, so people add more and different SVOD services. 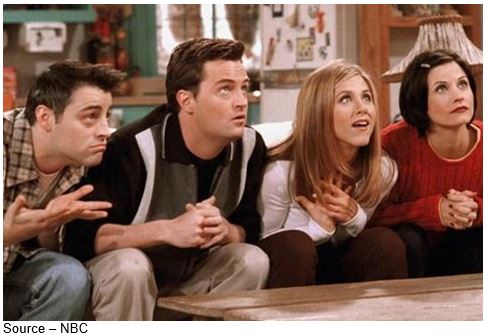 Rising Cost – People cut the cord to reduce their entertainment costs; but suddenly, the combination of subscription services they have sends the budget up … again.  And some services are asking folks to sign two-year contracts with a big bump in charges on year two … go figure.

So, people watch their entertainment budget (the budget they wanted to slash by dumping pay TV) go up and up and…

They are now faced with three options to feed their new habit:

-          Pirate content – dumb because there’s an excellent chance bad folks will add special ingredients like malware and apps that will steal usernames/passwords, probe user networks and surreptitiously upload data without consent.  In other words, pirating is more expensive in the long haul.

-          AVOD content – No, it’s not a return to the pay TV model of 10 minutes of ads for 20 minutes of entertainment because the ad-supported services deliver fewer, more personalized programmatic ads.  Your data lets them deliver “friendly,” interesting ads and far fewer ads (30 sec. ads in 3 min. slot).

-          vMVPDs – virtual multiprogram video program delivery services which might even be your old cable guy who woke up and realized he could deliver a customized package of channels and viewing options over the internet connection service you’re already buying from him or a Roku device that gives you a dizzying array of free, partially free and subscription viewing options.

Of course, connecting with the right agent who will work hard finding the right national, international service that connects with the right audience isn’t always easy, as countless creators and filmmakers will tell you; but no one ever said entertainment was an easy business.

Ultimately, the consumer decides what works, what doesn’t. 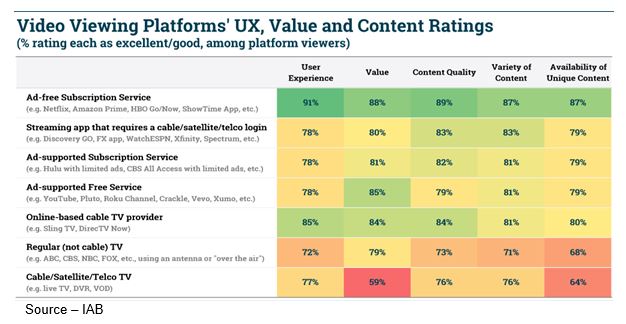 Preferred Options – With the expanding playing field of viewing and entertainment options available to people, we are becoming close to offering something for everyone and the options will continue to evolve.

Because of the growing volume of content and services, the consumer has more options and less time to search through them all.

So, they’ll focus on those that deliver good-enough stuff and a better user experience.

One evolutionary shift that you probably won’t even notice is the increased availability of “gotta watch” foreign content – no matter where you live.

Subbing and dubbing shows/series will become more automated and more economic, and the country of origin will become less important than the content because we all love a great story.

Intelligent technology and data will play an increasing role in helping people choose the entertainment habit they want to adopt as their own; and once those habits are firmly established as normal, it will require a new revolution to get them to change. 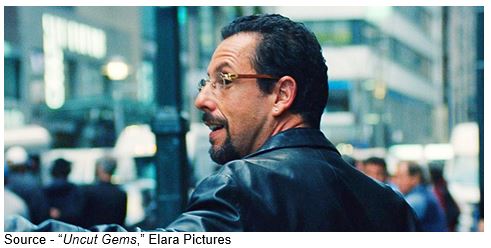 You know, content that Howard Ratner makes a habit so he will view for hours on end anywhere, anytime and on any screen and say, “This is me! This is how *I* win.”