New Blood Can Give Theaters a New Lease on Life

New Blood Can Give Theaters a New Lease on Life

Truthfully, if it weren’t for the fact that our daughter had to see Trolls World Tour, we wouldn’t have given the film a second thought.

She would have had to force us (pout) to take her to the theater but dropping $20 for something special for her to watch OTT wasn’t that bad.

And the popcorn was just right – not overly aged, over salted, over buttered, overpriced!

NBCUniversal took a huge gamble offering it TVOD rather than waiting for theaters to reopen.

They pulled in about $100M, compared to $153.7M for first theatrical showing of Trolls.

Disney + showed Hamilton starting the 3rd of July and racked up ¾ of a million added subscribers.

Universal realized about 80 percent of the sales vs. 50 percent in theaters, so it was more profitable to them.

Going OTT to the consumer had some folks whispering “good goin” and others screaming “never again.”

According to Gower Street Analytics, only one percent of the global cinemas were open in early April--mainly in Japan, South Korea and Sweden.

When Universal went around them, Korean cinema owners said they wouldn’t bother playing it, which probably didn’t hurt Jeff Shell, Universal’s CEO, too much since their April showing of La La Land only resulted in 2,101 tickets sold.

AMC, which was up to its ears in debt, said that when (if) they reopened, they would never show another Universal film. 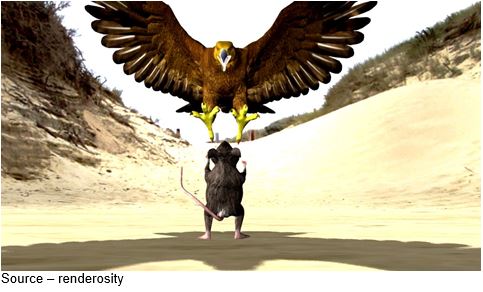 Want Some of This – AMC calling out NBC Universal for streaming Trolls World Tour was perhaps the thing they had to do; but when the CEO has to furlough himself in the shutdown, it may be a fight they can’t win.

It was a clear battle cry against the streaming barbarians who have been viciously attacking their exclusivity window for years.

Of course, there are others who feel a film--a real film--has to first be shown in a theater, not sent to the second-class TV (or smaller) screen.

Netflix, Amazon, UK’s TVoD Curzon, Disney and others have constantly challenged the Oscar and Emmy rule makers because the awards usually translate into bumps in subscriptions and transactions.

However, if they do a limited theatrical showing, get a bump in ticket sales and then stream it, everyone is happier.

The same creative talent and work is involved, and that talent/work deserves to be celebrated regardless of the venue.

The industry has changed and it ain’t gonna go back to the “good ol days.”

There are more viewing opportunities for consumers.

There are more opportunities for content creators to get their work in front of people and find their audience (or not).

That boosts the entire industry.

Even without the pandemic, SVoD surpassed cinema in the US and was on track to do the same in the European and Chinese markets before nearly all of the 1,895K screens around the world went dark.

While revenues have gone up for the last few years, movie ticket sales around the globe have been flat. When the screens light up, no one expects people to rush back…at any cost. 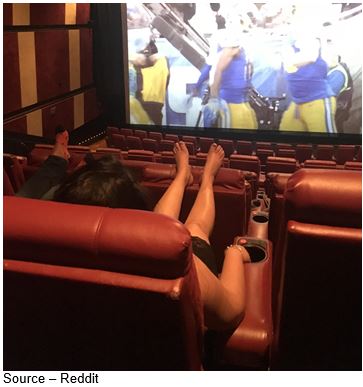 Relax Dude – Cinema owners will have to do quite a bit to make movie attendance inviting again; and, of course, ticket buyers can help by doing things like cleaning up their food wrappers/boxes and not pretending they’re at home alone.

Certainly, high ticket prices are one reason but there are dire, difficult-to-change reasons.

Ampere executives note that with the global lockdown, people have found great entertainment, whether it’s on the big; small or smaller screen, is comfort food for the mind and soul.

They point out that OTT film viewers are often avid cinema goers and that theater owners should focus on rekindling/reinforcing the shared experience of watching a film on the big screen rather than raising prices and viewing barriers.

Telling studios and content owners “our way or the highway” isn’t exactly smart, since people have multiple roads to their entertainment.

They don’t really care which one they take as long as they arrive at their destination.

Trolls World Tour, The Invisible Man, Hamilton and others didn’t go T/SVOD to thumb their collective noses at stagnant/shuttered theaters, but rather to recoup as much of their investment as possible.

Immediately rushing back to the cineplex won’t be high on the consumers’ gotta do now list anytime soon. 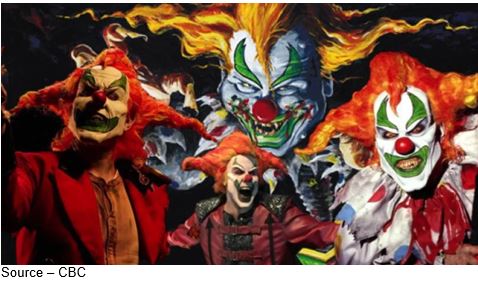 Less Than Inviting – Going to a clown horror flick can be scary but cinema owners will have to do a lot to reassure movie goers that things won’t bite them.  It will take time to rebuild confidence.

Even as they pay multi-million-dollar leases for buildings that sit empty, they will have to rebuild the consumer’s interest and trust over a long period of time.

Things were so glum for theater screen owners that even VIP Cinemas, the world’s largest manufacturer of luxury reclining movie theater seats, threw in the towel and filed Chapter 11.

The successful streaming of a tentpole project made life even more difficult for global theater chains that have been struggling for years. 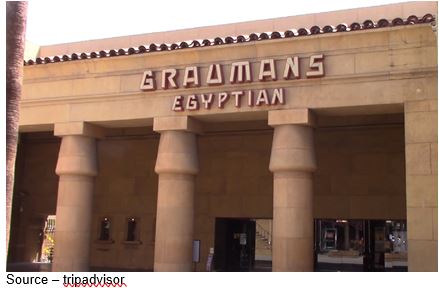 Netflix Big Screen – Netflix not only rescued several of the country’s iconic movie theaters, they now also have homes for showing films to people who feel the only way to enjoy/experience them is on the big screen.

Yes, Quentin Tarantino rescued LA’s historic New Beverly Cinema and Netflix purchased New York’s Paris and Hollywood’s Egyptian Theaters to preserve the industry’s past, but they also did it with an eye to the future.

Thanks to the reversal of the 1948 Supreme Court ruling that broke up the studio system, the old and new deep pocket content developers/distributors (Netflix, Amazon, Apple, Disney and their international counterparts including Baidu, Alibaba, Tencent) have an opportunity to grow their entertainment opportunities … over time.

Already an integral part of folks’ day-to-day lives, Amazon has been stalking the weakest in the herd – AMC (2200 EU and 8200 US screens) – to add to its entertainment roster – Prime Video, IMDb, Twitch, etc.

AMC shareholders were thrilled anyone was interested in the heavily leveraged chain.

Shares had dropped 50 percent and the prospects of returning to profitability over the next 12-18 months were dim.

Actually, it could be a good match for Amazon:

·         It gives them “legitimacy” for statues with the Academies

·         It gives them added destinations for Prime members, similar to Whole Foods

·         It presents opportunities for them to fill the lobbies and dark spaces with permanent, rotating shopping opportunities

Amazon already has more than 101M U.S. Prime subscribers (150M plus globally), so Prime member exclusives/special showings could fill a lot of seats--when folks are ready to return.

Even the 49-50M European theaters can be leveraged by Amazon because countries such as France require a strong percentage of the content to be produced locally and to be shown in theaters prior to streaming.

A win-win for Amazon.