I couldn’t believe my ears … my wife said I was right!

She’s been okay with our switching from Pay TV to streaming.

Doesn’t miss the 20 minutes of monotonous, repeat ads we had to “pay” in order to watch a TV show or movie.

We not only saved serious money but quickly discovered we weren’t tied to the networks’ schedules.

She thought we were absolutely brilliant when she heard the NBA season was finally going to be underway down at Disney World’s ESPN center and the games would be streamed on ESPN (part of our Disney bundle).

After months of the parks being closed, having the NBA “season” on a Disney property sent a very positive message. And, it was better than going to a movie at a place that’s owned by folks on the brink of bankruptcy.

CEO Bob Chapek also used the announcement to show the mouse house was on the road to recovery.

He said that even operating at 50 percent capacity, Disney’s parks will cover their variable costs and a portion of the fixed costs plus, things will get better.

Kids (and parents) are anxious to get back.

Having the games there will just give folks the confidence to come back sooner rather than later. 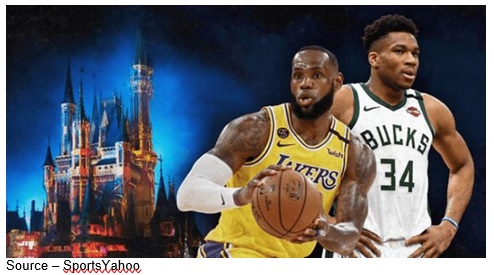 Exciting Reassurance – Holding the shortened basketball series/finals at their house was a brilliant coupe by Disney.  Instantly, the mouse’s Florida house was credibly safe from the pandemic and it provided an eager audience for the firm’s ESPN and streaming services.  No matter which team wins, Disney and Disney + scored the most points.

My wife wasn’t completely happy though because the Warriors weren’t playing. But, even before the shutdown, the team’s season for 2020 was in the cellar.

Next year will be better.

Until then, she’s got her Bball fix and the rest of us have Netflix, Disney ++, Apple TV +, Amazon Prime, Tubi, Pluto for entertainment when we want, where we want. 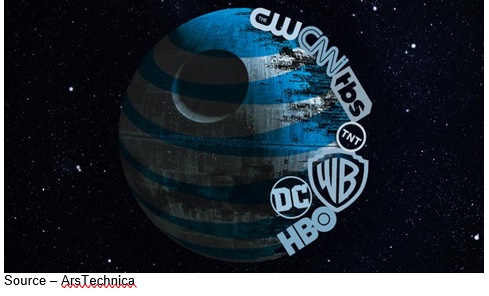 Death Star – Thanks to a huge debt load, AT&T flew into the M&E universe.  Now all they have to figure out is how to determine if consumers are interested.

We considered the GOT house but passed because it looked … lost.

It started with AT&T’s Randall Stephenson having red carpet envy and borrowing $85.4B to buy Warner to give the company a whopping $165B in corporate debt.

To shrink their debt, they’ve culled their field force and focused on “portfolio rationalization” – making it known the game division was for sale although gaming has shown solid growth.

Even though Netflix has proven consumers are price sensitive, the phone guy just shrugged and offered his fantastically confusing bundle for $15 a month saying, “Hey you get what you pay for”…or not.

Right after the acquisition, John Stankey, who has since replaced Stephenson, told the HBO crew, they would focus less on quality content and more on a broader, bigger selection.

HBO was the place to go when you wanted outstanding entertainment amid the morass of broadcast TV.

While the rest of the mobile phone industry was busy building out their high-capacity 5G networks, AT&T figured it was smarter – and cheaper – to simply put 5G E on their phones (E = eventually).

FTC finally said knock it off, deliver 5G then figure out how to get your creative content mojo.

We understand that from the outside; the creation, production and distribution of content looks inviting/glamorous but … it ain’t necessarily so.

Just ask film folks who scramble every day doing what they enjoy. 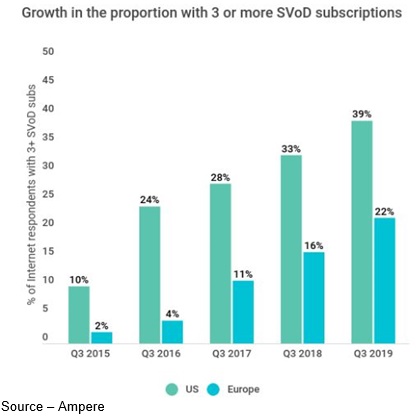 Service Weary – Consumers seem to have determined that 3-4 SVOD services plus one or two AVOD services are the most they want to juggle for their entertainment.  It’s a budget (time, money) thing.

The challenge for content creators, streaming services and consumers is that there is too much of a good thing (OTT options) and consumers are overwhelmed, confused.

“There are more than 300 streaming services currently in the US,” said Allan McLennan, Chief Executive of PADEM Media Group,” and thousands around the globe but in many cases, there’s little to differentiate one from another except pricing and select programming.”

With the lockdown, production stopped – everywhere – and broadcasters’ new show inventory withered.  So, network bosses got creative and figured since you spent all day on Zoom office calls, you’d probably really be excited with … Zoom shows. 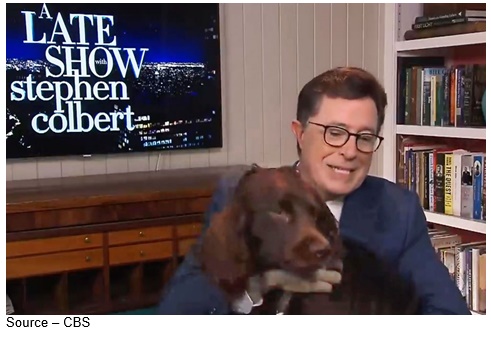 Zoom Entertainment – To keep the discussion going, late night talk shows and specials were done using Zoom, which didn’t seem to appeal that much to people working from home and in Zoom meetings for hours on end because ratings dropped … sharply.

Quick, change the channel/cut the cord!

“Now that viewers have made the change, they appreciate the convenience, content quality and value.  This new habit will be tough to change,” McLennan emphasized.

Big Streams – While Netflix reigns as the world’s largest streaming video service, Disney entered the market at just the right time with just the right content mix and at the right price. There’s room for both to thrive in the market.

A deep, rich family-oriented content library and a reasonable subscription fee certainly made it easy for folks to sign up, but hesitation disappeared when they unveiled Mandalorian and they instantly loved Baby Yoda.

To keep the momentum going they moved Hamilton to a July 3 streaming debut rather than waiting until October 2021 for a theatrical release.

Soon the kids will be able to catch the second season of Mandalorian, a knight in shining armor (pun – not sorry!).

Netflix, Disney +, Apple TV+ and Amazon Prime (free package delivery) have one thing in common … perceived value.  Sound reasons why Digital TV Research estimates that SVOD will continue to dominate the global OTT market with revenues doubling from last year’s $83B to more than $167B by 2025. 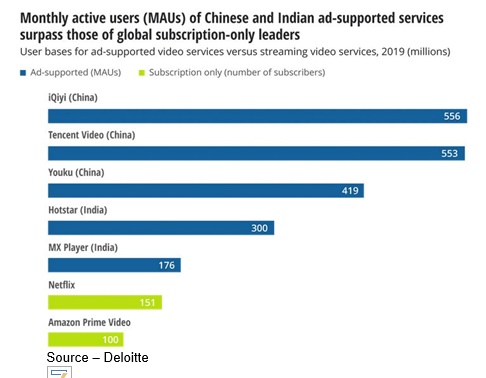 AVOD Winners – While ad-supported streaming services have been slow to take off in other areas of the globe, Asia’s India and China have shown free content is a good thing.  Consumers in other countries are slowly warming to the idea of paying for their entertainment with a little bit of viewing time.

While the global SVOD subscription numbers are impressive, McLennan said that they pale in comparison to Asia’s (China, India) streaming ad-supported leaders.

“With a low density of ads (three to five minutes per hour) and the ability to personalize ads to the viewer, brands are overlooking a major opportunity to reach and inform consumers during the lockdown,” McLennan observed.

“However, the wrong programmatic ad placement whether on television or in social media can sometimes do more harm than good for the brand if not accurately inserted,” he added.

It seems logical to us that the time is right for brands to talk to consumers in a nice, friendly (convincing) voice while they’re trapped in front of their screens.

Then, when they can finally escape to the world outside, BAM! they’d be ready and willing to buy from firms that they recognize, know and empathize with them.

Tom Ryan, CEO of Pluto TV (ViacomCBS), agreed recently that ad-supported services have been regarded as the ugly duckling of streaming--especially in the US.

However, with the growing confusion surrounding SVOD services and the mounting cost, we are confident viewership will increase dramatically in the years ahead. 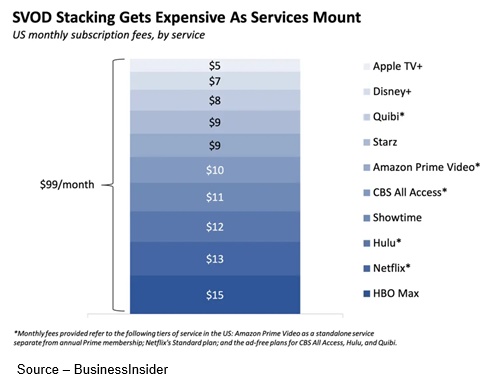 Costly – A few dollars here, a few dollars there and pretty soon the consumer discovers they’re paying as much if not more for their entertainment than with their Pay TV.  In addition, it’s difficult to remember which gotta-watch show is in which service.

As viewers increase, marketing folks will hopefully discover that IP-content enables them to reach consumers in a much more qualifiable and quantifiable manner – better ads, more personalized ads, satisfaction for brands/consumers.

Pluto has more than 200 free channels and thousands of free movies.

Most of the AVOD services have a broad range of genre to appeal to people of all ages as well as news, information and entertainment tastes.

The shows/films may not be new by your definition, but we figure if we haven’t seen them … they’re new! 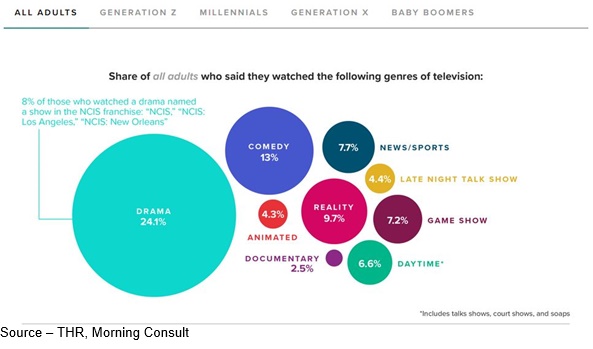 Wide Range – AVOD services like Pluto and Tubi have acquired a wide range of news/entertainment genres to appeal to the broadest possible range of viewers.  Variety and selection options cover the widest possible consumer spectrum.

Consumers didn’t flee appointment TV for SVOD because of ads but rather because of the overabundance of spray and pay ads that were squeezed into every hour of watching news and entertainment aimed at the broadest possible demographic.

However, IP-based AVOD services will not only allocate fewer ad blocks, but the ads can be more personalized, delivering a tailored message to a specific rather than a general audience.

As ad great Lee Clow (he was responsible for some of the most memorable stuff for Apple) said, “People's relationship with a brand is becoming a dialog, not a monolog.”

And that, combined with difficult creative work, is one of the opportunities AVOD provides brands.

India’s Hotstar (Disney) and MX Player put mobile AVOD in the hands of millions of citizens. 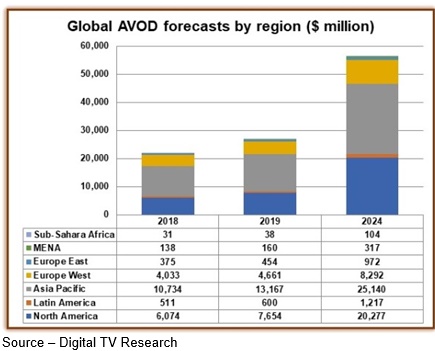 Profitable – Yes, there is money to be made in “free” show/movie offerings.  By limiting the ad volume and enabling brands to tailor ads to the consumers’ interests, the advertising is welcome rather than abrasive.

Asia Pacific AVoD took in about $15B last year with their primary cost being content acquisition.

Deloitte projected that ad-supported services should grow rapidly in the US because there is only room for a few “gotta-have” subscription services in family budgets.

After that, free or supported streaming services become a welcome viewing alternative.

Especially when people can watch what they want, when they want and on the screen they want wrapped around a few meaningful, useful ads. 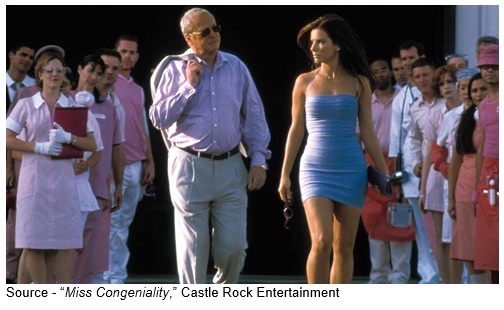 As the M&E industry continues to evolve, remember what Gracie Hart said in Miss Congeniality, “It takes a very secure man to walk like that.”

Eyeballs count and increasingly, the consumer’s eyeballs have the final say as to what will win … or lose.