Broadway theaters didn’t close for the 1918 Spanish Flu epidemic and have only shut down 13 times due to labor strikes, natural disasters and tragedies like 9/11.

But on April 12 the icons of rich personalized entertainment closed their doors to slow/stop the spread of coronavirus (Covid-19), shutting down great shows like Tina, Hamilton and other plays and shows.

Great Content is Driven by Viewers, Not How it's Delivered

Now we can only wait for a cure and attendance guidelines for live performances to return.

Maybe by the 4th of July?

Silenced – We frankly didn’t think anything could silence Tina’s voice, but the global shutdown sent everyone home and silenced theater performers and audiences including the dynamic Tina Turner.

Nothing would be more fitting than a double dose of Hamilton on Independence Day – on stage and on our home screen.

You celebrate your release from insulated, isolated days, weeks, months your way … we’ll celebrate ours.

The film industry has always done a good job of capitalizing on special “feel good” days in countries around the globe.

We’ve enjoyed some really cool ones.

This year, it’s Disney+’s  roll-out of Hamilton with the original stage cast.

Almost as good as the play on Broadway.

Wait--it will be as good … only different!

Had it come out in theaters, we would have made an exception and ventured into a cinema.

We would have paid $20 to stream it, as we did for our daughter with Trolls World Tour.

But we still feel sorry for Bob Chapek, who took the helm at Disney from Bob Iger just as the pandemic hit the fan. 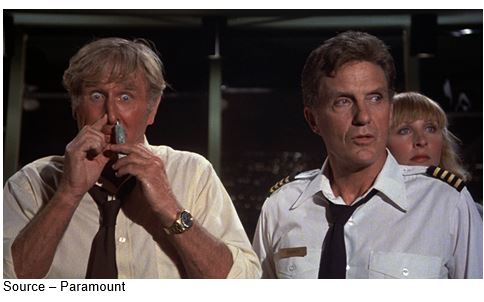 Bad Timing – Bob Chapek was seemingly handed one of the best jobs in the M&E industry – CEO of Disney – when Bob Iger stepped aside.  It’s a bad time to be put in charge of running everything but the industry and Disney will be back to a new normal … soon.

One minute you’re leading the crown jewel of the M&E industry and the next minute you feel like Lloyd Bridges in Airplane.

The first thing you have to do is shut down the family-popular and pretty profitable Disney destinations (and cruise ships) around the globe to minimize red ink.

Then, you have to focus your attention on what was going to be – long term – the great moneymaker for the company – DTC (direct to customer) streaming. 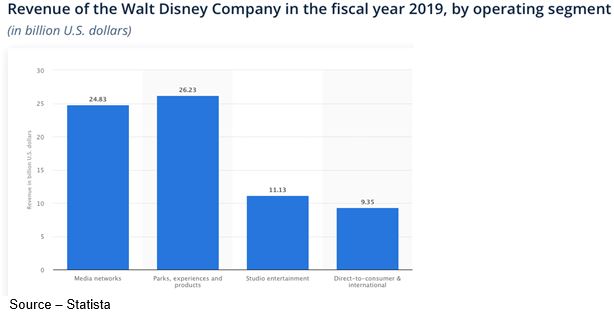 Profitable…Then – Disney was one of the largest, most profitable, most globally respected names in the M&E industry until the pandemic put the world on hold. Attention to details and consumers will help it reemerge.

It wasn’t part of the plan but having everyone homebound around the globe got people real interested, real fast in the Disney + offering.

Yes, some of their content is still tied up in local outlet deals; but the company is pushing as quickly as possible to expand in Latin America, Western Europe and the Pacific Basin.

With aggressive global expansion, reshuffling release schedules and opening up more of its library, Digital TV Research estimates Disney+ could surpass 200M by 2025.

Some folks said Disney+ needed Hamilton because the engine is “running dry,” but have you seen every other streamer’s pipeline?

Trickle – The Pay TV and streaming industry’s new content has slowed to a trickle instead of a blast.  It could take six to nine months for the industry to shoot, produce and release new content for people to view.  Until then, libraries matter.

Everything was put on hold – new tentpoles aimed at theaters, new shows/series for TV, new work for streamers, sporting events, concerts – and it’s going to take time to prime the pump and get new good/great content out there for folks to take in.

In the meantime, people will have an opportunity to catch up on some pretty darn good films they may have passed over earlier. They can watch them and discover some great creative work.

Dig around and you’ll suddenly discover there are some darned good indie films out there that would have appeared only in art film theaters that you “discover.”

The two Bobs are also developing detailed plans and roadmaps for opening up their profitable Disney destinations – theme parks and cruise lines. 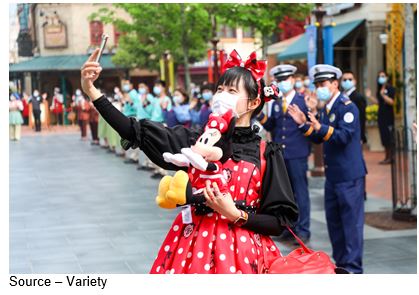 Soft Opening – Disney is watching the public’s response to rules and guidelines they are putting into place at Disneyland Shanghai to determine what works best in the company’s phased opening of their global entertainment venues.  Consumer impressions of measures taken will determine how quickly the M&E industry recovers.

The company is studying people’s response to rules in the recent partial reopening of Shanghai Disneyland.

Iger noted that people have to feel comfortable and safe to once again enjoy the theme park.

While the ultimate release of a vaccine is outside Iger’s control, he and the team are developing new restrictions, possibly including face masks and temperature checks to give people peace of mind.

“Just as we now do bag checks for everybody that goes into the parks,” he commented, “we could add other components.

“We’ve asked ourselves the question, let’s prepare for a world where our customers demand that we scrutinize everybody. Even if it creates a little bit of hardship, like it takes a little bit longer for people to get in,” he added.

Proactive efforts like these can speed the recovery of the family destinations.

Having ESPN, their sports network, cover events in empty venues with dramatically reduced advertising could take … a while.

Moving big titles to their streaming services as opposed to providing tentpoles first for exclusive period viewing doesn’t mark the death knell of movie theaters, but it did get chain owners attention that changes have to take place.

It’s a poorly kept secret that ticket sales have been flat for the past few years even as the chain’s income receipts have dropped. 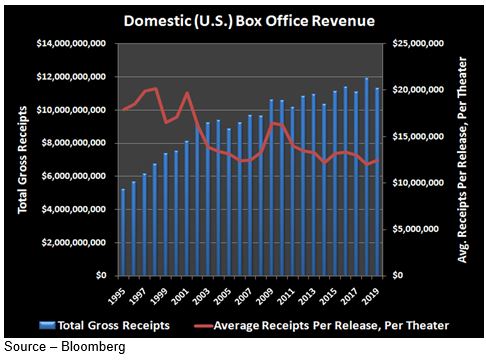 Flat to Down – Even before the global pandemic, movie theater ticket sales were flat to down. Movie house owners will have to make dramatic changes to get seats back in seats.

Yes, it did seem a little hollow when AMC and Regal chains said they wouldn’t be showing films if they didn’t get back their 90-day exclusivity “right,”  or wouldn’t show anyone’s film period if they moved projects to simultaneous showing or streaming first.

Ah guys … without the big, hot content; what are you going to do with your leased buildings and all those rows of seats?

Dunno, but we can pop and eat popcorn at home where we sorta’, kinda’ know the surroundings are safe. 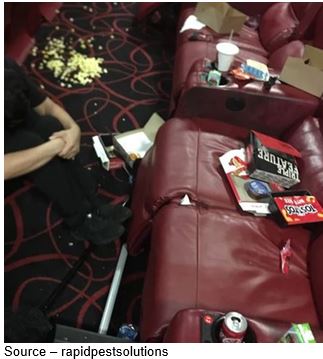 Depressing Job – Movie theater crews had a thankless job even before the pandemic. Management will have to be more aggressive in their cleaning and sanitation processes to win people back.

And yes, we have seen theaters that bad!

Somehow, watching a killer movie with a bunch of “friends” in this type of environment isn’t that exciting.

However, the idea behind a movie theater as a place for people to have experiences beyond the movie itself can pry folks out of their homes to enjoy a night out.

But it means taking the same precautions – and communicating them to people – to give them a clean, friendly environment. 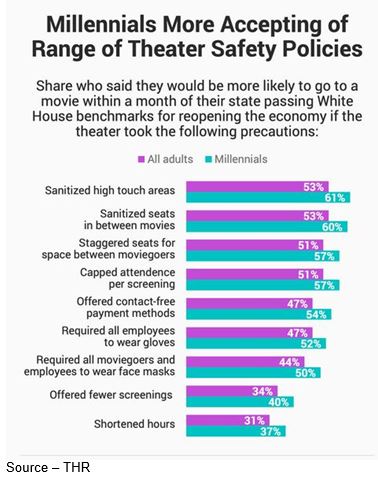 State of Clean – Movie theaters will have to develop and carry out stronger cleanliness and safety procedures to woo people back to seats. Then, they will have to clearly, effectively communicate what they are doing to improve conditions for the consumer to enjoy their entertainment.

“Movie theaters have always come back, and when they do, they’ve been better,” said Maggie Valentine, author of “The Show Starts on the Sidewalk,” a history of movie theaters.

She noted the ‘20s movie palaces were a response to the 1918 flu pandemic and that a drab, run-of-the-mill experience wouldn’t do the trick.

In addition, visual quality has been steadily improving with 4K/8K production enhanced by short-lived projection and seating systems.

Smaller independent and art theaters are already exploring new ways to make them more relevant to their target audiences including retro renovation, live appearances of filmmakers and more.

The key for them – and every big box theater – is to make the theater an event, a destination built around the film(s) being shown … a real experience.

Regardless of what some filmmakers like to insist, showing content in a theater doesn’t make a project a better movie but maybe – just maybe – a little more fun for the folks in the audience (you know, the people who actually consume the content).

Netflix Roma and The Irishman were memorable films people wanted to see … and did!

Disney, Universal, Paramount, Sony, Gaumont, Tencent, Alibaba, Egmont, Toho and others around the globe are still working on visual stories that play well on the really big screen as well as all of the home screens. 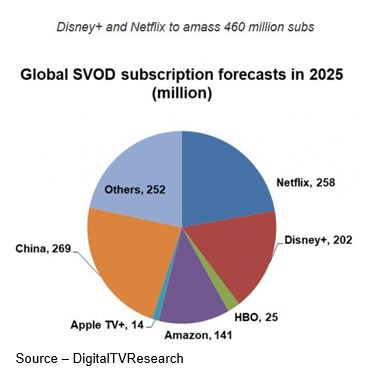 Streaming Momentum – People around the globe have quickly realized the convenience of watching what they want, where they want, when they want and on the screen they want.  New projects attract subscribers, but libraries keep them.

People obviously showed with Trolls that they were more than willing to spend a little more for the convenience of letting their kids watch something really special rather than do without.

Of course, Warner (AT&T) is willing to find out what the consumer’s content limit is while charging $25 to watch the fun film at home.

Suddenly, 80 percent of the gate compared to a 50/50 split looks … interesting. 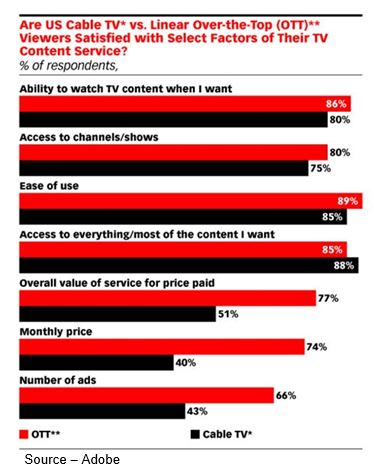 Choice, Ease of Use – The novelty of being able to watch all the new stuff will quickly wear off and people will begin choosing their entertainment services based on convenience and ease of selection well above the cost of the service.

It looks even more interesting for the consumer, especially when they’ve been stuck-at-home and have burned through all of barn-burners on Netflix, Amazon, Disney +, Apple TV +, Sky, ProSieben, Joyn PLUS+, Salto, ITV Hub +, NowTV, Box TV, Ditto TV and myriad of over country-centric streaming services.

Watching a movie in your pajamas and sharing hot popcorn with the family may not be the ultimate of social experiences but it beats catching something weird when you plant yourself in a slightly sticky seat in a really dark building with a bunch of people you don’t know.

It's not really a social experience but even though you’ve been fairly anti-social now for a few months, someone’s gotta give you a better reason to get dressed and drive somewhere to enjoy visual content made for the big screen. 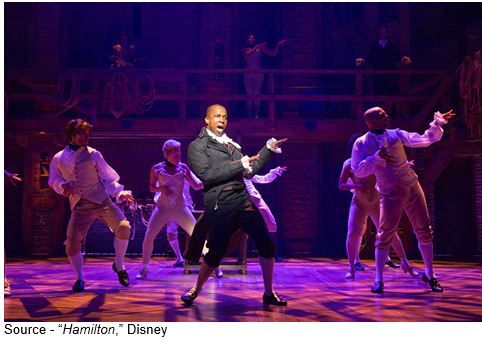 But he gave theater owners the wrong advice when he added, “Don’t let them know what you’re against or what you’re for!”

Consumers really want to know you’re creating, producing and showing the content just for them.

Andy Marken – andy@markencom.com - is an author of more than 700 articles on management, marketing, communications, industry trends in media & entertainment, consumer electronics, software and applications. He is an internationally recognized marketing/communications consultant with a broad range of technical and industry expertise especially in storage, storage management and film/video production fields. This has led to the development of an extended range of relationships with consumer, business, industry trade press, online media and industry analysts/consultants.