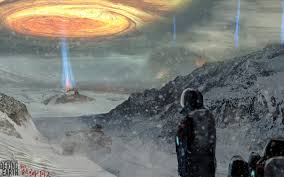 “Had you, for example, been only concerned with staying alive, you would have fled from this mountain as fast and far as you could. Instead, you chose to come and climb it.” – Liu Cinix, “The Wandering Earth,” Beijing Dengfeng International Culture Communications Company, 2019

In the future, after the pandemic is in the rearview mirror, you’ll be able to tell your kids’ kids what life and entertainment were like in the old days … AC (after Covid-19) vs. our much different BC (before Covid-19) world.

You’ll be able to tell them how entertainment and content helped smooth and ease the transition.

While the M&E industry will recover more rapidly than most (because people need that release), it will be different.

People who base pronouncements and projections on wishful thinking and/or yesterday’s data/trends are blowing smoke, have their fingers crossed or both.

During that awkward transition period, consumers looked carefully at their entertainment options, budget (time and money) and made decisions. 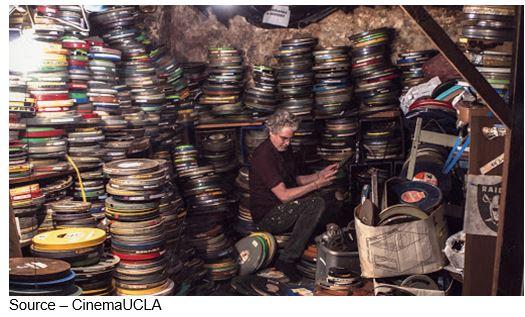 Entertainment Backlog – The M&E industry has a large stockpile of good to great (and expensive) content it needs to show to consumers sooner rather than later.

Creatives and their bosses had completed (or had in production) an impressive array of good, better, best (and yes, yuck) projects primed for spring, summer release.

But cinemas were closed, and everyone had serious doubts as to when – or if – people would rush to pay $100 for two to jam into darkened rooms with 50-100 friends/strangers for a night at the movie. Especially when they could sit at home, wear whatever, enjoy the movie on their screen when they wanted and pay $5- $20+ a month (plus drink/popcorn costs) for a full roster of films/shows they could watch … later. 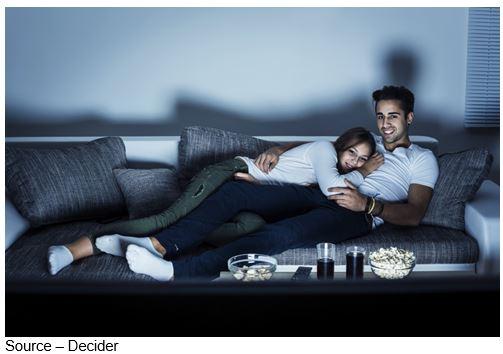 Relax, Enjoy – Shelter in place wasn’t so bad for folks when they discovered there was a world of entertainment available to them to watch on their screen(s).  Surprise!

They didn’t have to “negotiate” with theater owners on their exclusivity windows (traditionally 90 days) but Netflix had shown eyeballs and new subscribers were more valuable than a cut of the ticket receipts. Especially when lower ticket sales were down even though cinema overall sales were up (thanks to overpriced junk food). 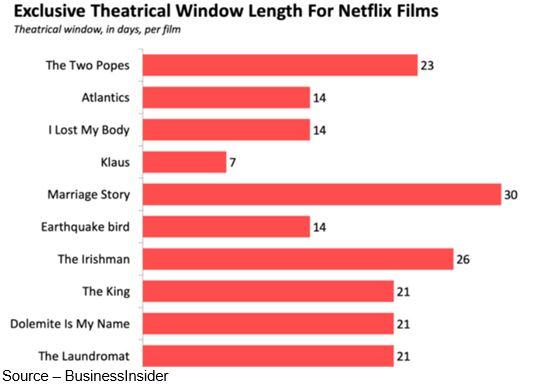 Theatrical Windows – Independent and chain cinemas have lost their clout when it comes to their exclusive showing window; and while theater sales/profits have grown steadily, it isn’t because of seats in the seats but rather concessions.  Netflix “bent” the rule and recent events bent it further.

In addition, there were huge questions studios couldn’t answer:

As for the tens of thousands of indie content producers, it was a no brainer … follow the money. 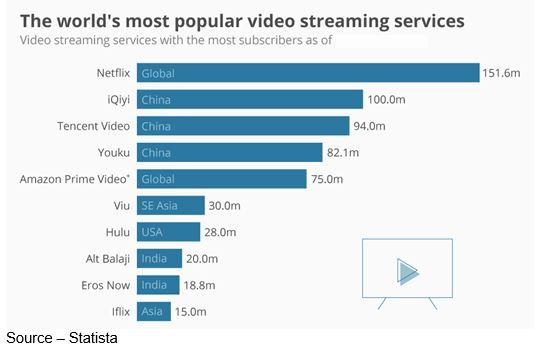 Bypassing PayTV – Streaming services of all kinds around the globe have found a ready audience for anytime, anywhere, any screen viewers willing to pay for convenience and quality.

The proliferation of streaming content options and price offerings were so appealing that demand got real good, real fast.

It was so good that the cloud and infrastructure folks (MS, AWS, Akamai, IBM, Google Alibaba, Tata and others) secretly wondered if they were up to the task.

Content streaming demand increased so much that the EU requested Netflix and YouTube (Google) reduce their streaming quality by 25 percent to minimize the Internet strain. 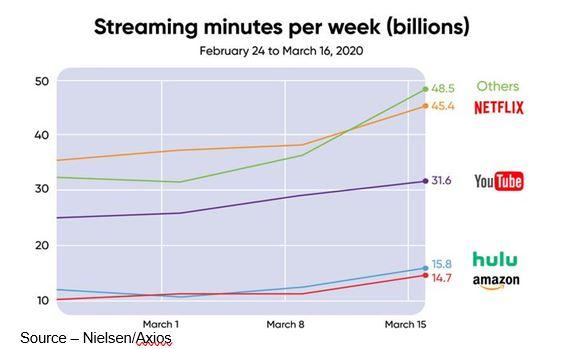 Time on Your Hands – Streaming services and infrastructure providers experienced significant uptake from folks streaming content during the pandemic shutdown.

And because folks had no place to go and had time on their hands to think/watch and consider the uncertainties of AC, they began simplifying and expanding their entertainment options.

First, they cut, shaved - or never had - cable packages.

They realized they had:

-          better entertainment options at their convenience

An estimated $120B was spent on creating content last year. However, studios and content owners have always been cautiously optimistic regarding the success and profitability of projects targeted for theatrical release.

Whether they invested $50,000 or $50M, backers and studios suffered from adequate access to clear, concise audience reaction data.

Cinema owners have been reluctant to invest in this research, which is why we see so many sequels and spin-offs rather than original movies/shows that might resonate with viewers.

Rather than throw stuff against the wall to see what sticks or committee the decisions to death, film/show decision makers and creatives did the smart thing – they followed the consumer and went where the data was … online.

Smart people know that the more audience data/information they have on how people engage, identify and interact with the content, better creative decisions can be made. 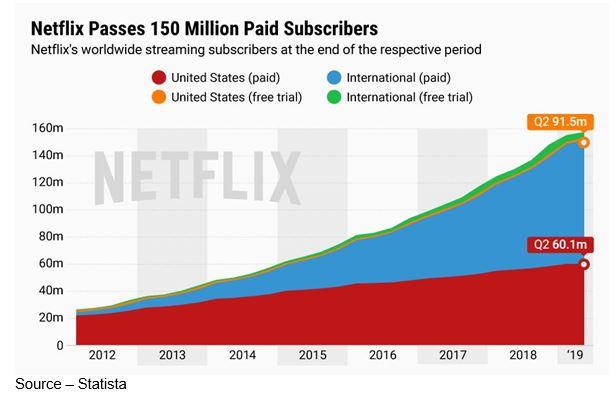 Steady Growth – Netflix has experienced steady subscriber growth in the U.S. and increasingly around the globe.  So much so that for most people, streaming means Netflix and Netflix means streaming.

Yeah, dumb like a fox because if you tell someone you’re streaming they ask what Netflix shows you’re watching.

Netflix discovered the importance of viewer data mining more than 10 years ago as it developed and acquired content and subscribers globally. 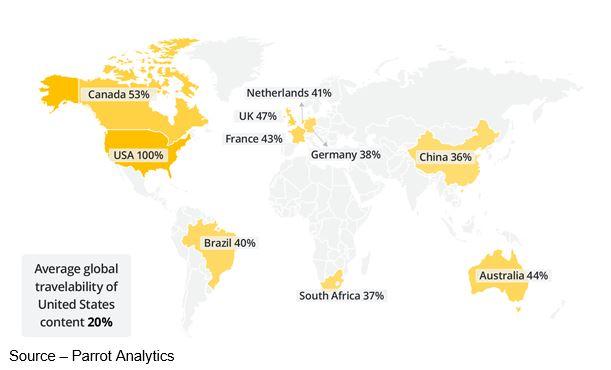 Genre Plus – While streaming services have to produce a certain percentage (usually 30 percent) of content locally to stream to customers in various countries, the companies also focus on how well the movie/show will travel (appeal) to subscribers in other countries.

Rather than just viewers in their own backyard, streaming services set their subscriber sights on winning folks around the globe. So, in addition to going for genre appeal, they also looked for content themes/substance that had broad travelability – general appeal around the globe.

-          Beefed up its dubbing activity in the EU, Japan and South Korea with plans to deliver local language content around the globe regardless of the country of origin as their dubbing/subtitle technologies improve and become more cost effective

Of course, localization has long been part of Disney’s global release strategy, but they still face the same country by country hurdles as Netflix even though governments and consumers like them and are anxious to watch the stuff in the Disney+ library.

Amazon with nearly 120M Prime subscribers around the globe and Apple with more than 100M global customers will similarly offer a modest library of Apple TV + content dubbed and/or subtitled.

Everything was going as planned … until the pandemic. 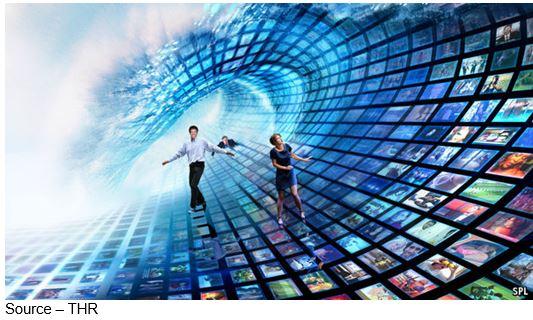 Big Wave – To dull the impact of the stay at home pandemic; men, women, kids created a content tidal wave effect for internet infrastructure providers that continued to grow as it swept around the globe.

Similar upticks were experienced by service providers around the globe.

The combination of an over abundance of subscription services/content and the tenuous job market will probably force consumers to make hard decisions – which of their FAANGD/BAT Services do they absolutely need while they supplement their home/personal entertainment with free ad-supported services such as Philo, Tubi, Pluto, Crackle, IMDb.

The ad-supported stuff is really good. 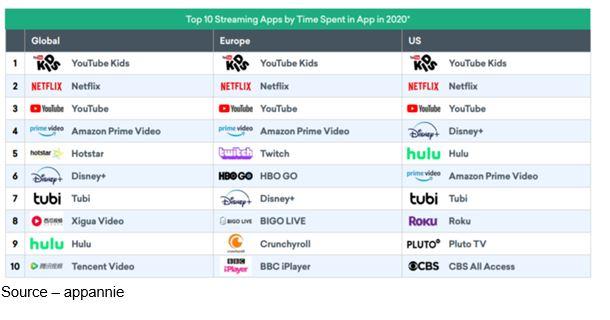 Interest Spread – The service and content that’s important to you isn’t the same as that your kids, neighbors or friends half-way around the globe find interesting.  All it says is … tastes, needs vary.

You hardly notice the ads – they’re short (the good ones), relatively unobtrusive, and increasingly tailored to your interests – thanks to the personalized data you innocently provide.

Sure, they range from dumb, stupid, cute, OMG, aawww and wow to more/more, get outta here!

It’s almost as though OTT streaming stuff got interesting as we moved from BC to AC and the content industry is along for the ride as we begin the new journey.

As Liu Cixin said in The Wandering Earth, “It is the nature of intelligent life to climb mountains. They all want to stand on ever higher ground to gaze ever farther into the distance.”

If we do it right, we’ll not only make a living and leave a creative legacy but also …turn a profit.

Andy Marken – andy@markencom.com - is an author of more than 600 articles on management, marketing, communications, industry trends in media & entertainment, consumer electronics, software and applications. He is an internationally recognized marketing/communications consultant with a broad range of technical and industry expertise especially in storage, storage management and film/video production fields. With his expertise and experience, he has also developed an extended range of relationships with business, industry trade press, online media and industry analysts/consultants.