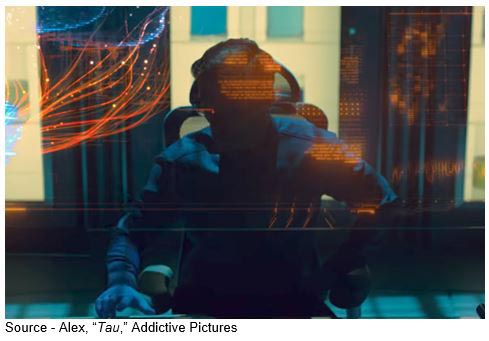 “Your thoughts produce electrical signals, which the implant captures and decodes into algorithms. And stalling won’t help you now.” Alex, “Tau,” Addictive Pictures, 2018

CES really is the greatest show on earth … 29M sq. ft of exhibit space, more than 4500 exhibitors and about 1200 debit card startups.

Despite the Shortcomings, Homes are Getting Smarter

CES really is the greatest show on earth … 29M sq. ft of exhibit space, more than 4500 exhibitors and about 1200 debit card startups.

So, you look for key words – 5G, AI and voice recognition; and, if you’re really into that sort of thing, facial recognition.

We suppose that’s okay, but it just seems kinda’ creepy to sit around and have things do stuff for us that we’re perfectly capable of doing ourselves–especially when we know the things we talk to also talk to each other and someone else, somewhere about stuff.

Alex van Es brought his refrigerator online in 1998 in the Netherlands. So far, he’s opened the door more than 70,000 times and networked it to the lights, doorbell, mailbox and toilet.

Since then. companies around the globe have been working on connecting home things/devices to do stuff you don’t want to do, talk with other things, gather more data and share it to help you buy more things.

Thanks to Qualcomm, Ericsson, Huawei and other wired/wireless technology providers; those conversations will be faster as 5G/WiFi6 as service providers everywhere roll out their new high-speed, low-latency infrastructure.

Because of its rapid roll-out of 5G technology, China already has 10-13M 5G phone users and is aggressively expanding the service for personal communications in addition to expanding its smart city, autonomous vehicle and IoT programs.

South Korea has also been rapidly building out its new infrastructure and already has more than 3M 5G phone subscribers who were willing to pay for the expensive phones and higher service plans.

Meanwhile, Qualcomm is very upbeat about 5G device sales across APAC (Asia/Pacific) and the Americas.

IDC projected 190M smartphones will be sold this year and that the volume will increase dramatically as phone prices drop.

We have a little breathing room on the family’s device upgrades because our son is pretty happy with his streaming over 4G LTE and the wife only uses hers for texting/tracking the kids.

Maybe, when Apple rolls out the 5G iPhone late this year, they’ll surprise us as they did with Apple TV + with a low-cost unit so we can satisfy our daughter’s teary-eyed “But dad…” plea.

Doubt it; but hey, a guy can dream.

The first thing they say is you can download a complete 4K HDR movie in seconds; but they’re phone people not filmmakers so, it’s doubtful if they know what 4K or HDR  or video streaming really mean/entail. But that’s a minor point.

It’s more credible when Ericsson emphasizes that 75 percent of the network traffic is going to be video and streaming data needs the high speed, broad bandwidth and low latency if it’s going to be enjoyed.

The rest of the capacity?

Despite the constant challenge of security and privacy, it’s reassuring to have smart home solutions that provide personal/family security (especially if you have latchkey kids and want the peace of mind to know they are home), energy/resource management (hated to see our December heating bill), property protection  (smoke/carbon dioxide alarms and a security alarm connected to monitoring office).

Yes, we know “everyone” is getting a smart speaker, personal assistant, and smart camera phone/screen thanks to the big push by Amazon, Google, Facebook (three of the most trusted folks when it comes to personal data).

And even though they’re now able to show emotion with you, the things still expose users to eavesdropping and voice phishing.

Researchers at Security Research Labs (and lots of other folks) note that malicious apps can turn the smart speakers into smart spies to collect personal data (including passwords) and eavesdrop on conversations–even when you think they’ve stopped listening.

But if you’re concerned about proactive privacy, Apple does more than give it lip service.

Siri, Apple’s voice assistant, did get off to a rough start with functionality issues; but the HomePod deserves solid consideration because of the care they take in rolling out smart devices, the partners they select and their commitment to privacy.

As always, the biggest hurdles are a limited selection of smart devices and premium price tag.While some folks are concerned about them listening without their consent or even telling others what’s going on in your house, some folks find the targeted ads interesting/helpful.

YouGov found that half of their respondents (53 percent) found targeted ads helpful and 41 percent of 18-24-year-olds found them convenient.

Guess it beats the heck outta’ looking for something you didn’t know you really wanted.

What consumers don’t understand is that smart devices collect a vast amount of data and how it’s collected/used varies from device to device, company to company.

Security and privacy are something consumers like to lay at the feet of manufacturers and the government.

CTA’s president/CEO Gary Shapiro noted that digital privacy is of prime concern to the organization and its members.

When it comes to protecting consumer privacy, he noted that Europe is at one end of the spectrum with rules such as the right to be forgotten. Compliance has cost Facebook, Google and Amazon billions of dollars and forced the firms to delete individual’s data.

The opposite extreme is China which has no privacy of anything digital–especially if the government wants the information.

Shapiro believes the US and the free world should steer a course between the two and establish firm rules, guidelines and fines regarding data capture, usage and even metadata that prevent firms from sharing an individual’s information.

But that doesn’t/shouldn’t let the consumer off the hook.

They equally share the responsibility of updating passwords, patching systems and keeping abreast of potential problems/issues.We know, you’re only human; which is why consumers will spend nearly $103B this year for smart homes, devices and installation fees, according to Strategy Analytics.

They project that the smart home market will grow 11 percent annually, reaching $157 billion in 2023.

According to the report, there were more than 200 million homes with at least one smart home device by the end of 2018, and an additional 100 million were projected to be added by 2023.

We’ll probably be a little slower than that and hope Corning’s A Day Made of Glass comes sooner rather than later – https://bit.ly/2DmkoW7.

By then, they’ll probably have products and systems that adapt to us rather than us to them.

Don’t know what that means, but it doesn’t sound good.

Maybe at next year’s CES.